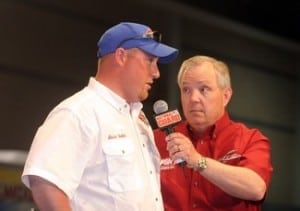 Travis’ 14-14 limit leads TBF National Championship David Hart If there is such a thing as a home-water curse, you wouldn’t know it after Conover, N.C., angler Brian Travis brought his limit up to the scales on the first day of The Bass Federation National Championship on Lake Wylie. Travis, a second-shift supervisor for a …

END_OF_DOCUMENT_TOKEN_TO_BE_REPLACED

CHARLOTTE, N.C. (April 14, 2008) — The best of the nation’s TBF club anglers are headed to Lake Wylie near Charlotte, N.C., for The Bass Federation National Championship presented by the National Guard April 24-26, where they will complete for berths into two of the sport’s most coveted events — the $2 million Forrest Wood Cup and the $1 million BFL All-American.