May 21, 2011 – TBF of South Carolina and DNR of South Carolina hosted the Juniors Championship on Lake Murray this past Saturday May 21st   sponsored by Berkley and Abu Garcia.  This bass tournament is comprised of Juniors and school  bass clubs from all over the state. Each club enters 6 young anglers that have earned their way into this State Championship though events held within their club.  Two Juniors Champions would emerge. One from each age group 11-14 and 15-18 years.  The winners will go onto the World Juniors Championship in Hot Springs, AR. in August of this year where they will compete for scholarship awards.   Also as part of this event one club team would be crowned as State Champions based on the total combined weight of all 6 team members.

Most of the young anglers found fishing to be tough. Hot temperatures, no wind and a great deal of fishing pressure added to the challenge. One club stood out though and would take away all the top honors.

Dixie High School must have been inspired by Casey Ashley who won here last week in the Elite Series tournament. Casey is a former graduate of Dixie.  The state champions would be Alex Davenport in the 11-14 age Group with 5 bass weighing 6.17 lbs.  Kameron Harbin for the 15-18 group

With 4 bass weighing 9.06 lbs.both from the Dixie club. They will go on to fish in Arkansas later this year.  Dixie High School Club consisting of Allison Flemming, Kameron Harbin, Drew Pearman, Alex Davenport, Ben Stone and Chris Bensel would emerge as State Champion Team with a total weight of 22.40lbs. and will display the Champion’s Cup at their school for the coming year. Big Bass awards were sponsored by Sportsman’s Warehouse and went to Kameron Harbin of Dixie  and  Carson Morgan of Camden Bulldogs.

The Bass Federation Juniors program is an excellent opportunity to introduce young people to the sport of bass fishing. Our thanks to Lorianne Riggin of DNR and Roxanne Coleman of Berkley/Abu Garcia , Herndon Chevrolet , Humminbird Electronics and Sportsman’s Warehouse. For more information about TBF and the Juniors program, please visit www.tbfofsc.com  www.dnr.sc.gov or www.bassfederation.com 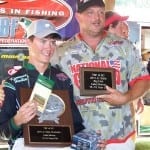 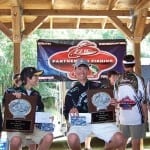 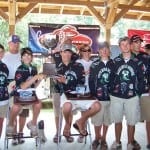