Fishing was tough on TBF’s 82 Junior State Champions today as they went head to head on day one of the 2011 National Guard Junior World Championship on DeGray Lake presented by the National Guard.   A 13-16 inch slot rule for largemouth bass forced several anglers to throw back keepers and left many short of a bite.  Anglers from 41 different states traveled to face off in this national contest knowing today it was all or nothing to decide who would advance.  The top two anglers advance from each of the six TBF junior divisions, one from each age group, 11-14 and 15-18, and claimed the 2011 Division Champion titles.  These 12 advance to the final shoot out tomorrow to crown this year’s National Champions.  Going into the final day of the 2011 National Championship in first are Donovan Jones in the 15-18 age group and Samuel Scott in the 11-14 age group.

Donovan Jones from Vine Grove, Ky., caught a five bass limit today weighing 11lb 10ounces.  “Ever since I started fishing the youth tournaments it’s been a dream to come here to the National Guard Junior World Championship,” Jones said.  “And I finally qualified my last year.”  It’s his first year and he’s not only advancing to the final day but he’s also leading going into it.  “It does feel pretty exciting leading it going into the final day.” Jones caught three keepers 30 minutes after launch this morning and then backed off hoping to leave some for tomorrow.  “I quit fishing about a quarter til 12; I left a few fish out there so I couldn’t stick anymore.”  Jones’s strategy played out for him today and left him about a three pound cushion going into the final day of competition.  I’m pretty excited; it’s something I’ve always dreamed about doing.  I don’t know how to explain it.”

A few pounds away, currently in third is Matt Baker from Olive Branch, Miss., with three fish weighing 7lb 3ounces.  Baker came out on top of the Central Division to advance, but it was no easy matter. Rumored to have a healthy limit of bass, and also competing for first in the Central Division was Sam Starr from Mcpherson, Kansas.  Starr was last to weigh-in and the crowd grew silent waiting on the scales to lock.  Starr’s limit of bass locked in at 7lb 2ounces, sailing Baker into first by just one ounce. “Well, I was in line and I looked down and saw someone that had five fish; I only had three fish,” Baker said.  “I said, ‘Man. That’s a buzz kill right

there, I thought I had this thing won.’”  A seriously tight win today has Baker taking no chances out there tomorrow.  “I caught my two biggest fish in one area; tomorrow, I plan on heading there and I’m not leaving for 3 ½ hours.”

Samuel Scott from just up the road in Hot Springs, Ark., leads the 11-14 age group going into the final day with three fish weighing 7lb 14ounces.  “I’m nervous right now, but I’m also really, really excited,” Scott said.  “I never thought I would make it this far.”  Scott also intends to do what he did today and hopes the fish will hold up for him one more time.   “I caught my three between 10-11am about 15 minutes apart.  It was rough out there and I didn’t know what to do at times; I panicked once, but I ended up catching those three and it got me where I needed to be.”  This is also Scott’s first time to qualify for a national championship.  “It’s the biggest thing I’ve ever done; to win it would mean the world to me.”

Saturday’s weigh-in will also be held at 1:30pm lakeside at DeGray Lake, and immediately following all anglers will travel to Summit Arena in Hot Springs, Ark. to be introduced on the FLW Outdoors main stage of the 2011 Forrest Wood Cup, presented by Walmart, at 4:45pm.   Live streaming will also be available at that time on www.BassFederation.com in partnership with iHigh.com. 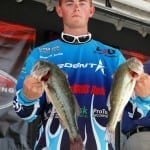 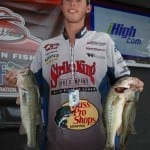 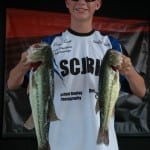 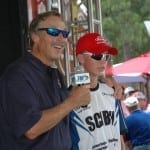