The 2022 Strike King Big Bass Challenge is Back

Well for the second year in a row the Canada, United States border has stopped Ontario Anglers from joining our New York and Pennsylvania state Federations from fishing together and creating great memories and friendships.

Ontario TBF members headed to Rice Lake Ontario, to fish one of the best fisheries in southern Ontario.

Rice Lake is renowned for big small mouth and kicker largemouth, to fill out a 5 bass limit with 20 plus pounds of bass required to cut a check in local tournaments.

With the combination of boater and angler keeping separate bags we opted for a four fish limit in hopes of making a conscious effort at being better stewards of the fishery.

Our host Adventure bay cottages were as excited to see the anglers rolling in for practice on Wednesday, as the anglers were to arrive and get down to figuring out the lake

At 7am Saturday morning the blast off began and at the end of the day some surprising results came to the scales, On the boater side Chris Walter and Theo Cheng we ounces apart with Chris weighing in his 4 bass for 12.57 lbs followed closely by Theo and his 4 at 12.48, close behind were Justin Fung with 11.46 and Doug Garrow with 11.01

On the co angler side only 2 limits were caught and the day one leader Lincoln Gagnon managed to bring 6.73 lbs to the scale followed by James Eckebrecht with 5.95 lbs and Jesse Krall with 4.87

Day one was without a doubt the worst start to any event we had seen. Realistically no one in the co angler field was out of the picture and certainly more than half the boaters had a chance Sunday to become a regional Champion

We woke up Sunday morning to frigid temperatures, but spirits were we high all boats blasted off at 7am and when it came time to check in at 3pm there was great deal of dock talk about who caught what and who would be our champion.

The co-angler side saw day one leader Lincoln Gagnon bring another limit to the scale of 12.45 lbs for a two day total of 19.18 with one co angler left James Eckebrecht needed a massive bag of more than 13.24 lbs to claim the co angler Championship. We soon learned what all the dock talk was about when James put 4 monster smallmouth on the scale for 18.14 lbs and claim the Co Angler Title with a two day weight of 24.09 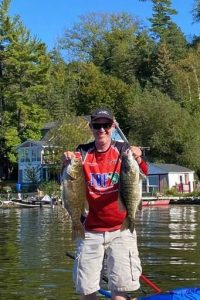 With the bite being what you would expect on Rice Lake everyone seemed to be having a much better day. More limits bigger weights and bigger smiles. On the boater side the field was close to start the day first up to the scales was Justin Fung who started the day in 3rd place. Justin put another 11.97lbs on the scale for the lead. Next Theo Cheng came to the scales and added 15.93 lbs to his day one weight for a total of 28.40. That left day one Leader Chris Walters needing 15 lbs to take the win. Chris was a little nervous coming to the scales and when it was all said and done he became our new Champion with a monster bag of 17.96 lbs for his 4 smallmouth.

Congratulations to Chris Walter a long time member and President of our Kawartha Lakes club. 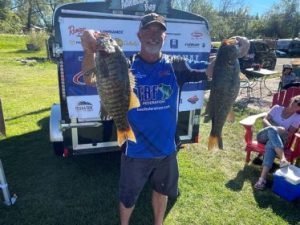 Our two 2022 Ontario TBF Champions Chris Walter and James Eckebrecht, We are excited for you both and know you will represent us well in 2022 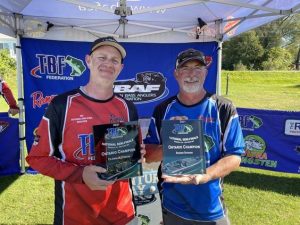 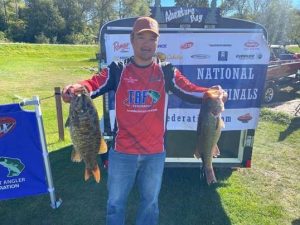 Lastly I would like to thank all of our participants and our hosts Adventure Bay Cottages for making our event a fun filled weekend. Looking forward to hosting New York and Pennsylvania on Lake Erie in 2022 in Port Colborne Ontario.