With a large portion of our military deployed overseas, Fathers Day can take on a solemn meaning when a child whose outdoor mentor is absent reflects back on Fathers Days of past. Hence a program Dave Kooser (Colorado TBF member and Colorado Walleye Association Chapter Director) started the summer of 2006.

This year Colorado TBF and Colorado Walleye Association members plus volunteers from other fishing clubs took 58 Ft. Carson Army children out fishing on Pueblo Reservoir the weekend of Fathers Day. Joining the 58 children were an additional 36 Army parents, some being soldiers who recently returned from their deployment.

The armada of 38 volunteer boats was launched June 14th and guided the children to walleye, largemouth, smallmouth and spotted bass as well as yellow perch, bluegill. All boats caught fish. This outing for some of the children was their first time on a boat and the volunteers were more than happy to just cruise around the lake and let the kids enjoy a boat ride.

Said SFC Jon Spiller at the opening ceremony, ” It touches us (deployed soldiers) deeply that our families are being cared for while we are deployed.” He also expressed his appreciation to the sponsors of the event as well as the volunteers. Jon, his wife Kris and their three children attended the first event in 2006. Shortly thereafter Jon was deployed to Iraq. His family took advantage of the 2007 event with him in Iraq. With the grace of god, Jon was able to return safely to fish again with his only son on TBF member Sam Heckman’s boat. 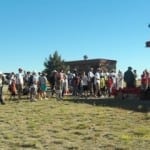 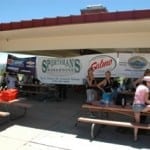 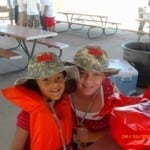