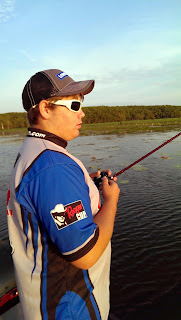 One of the best things to happen to our sport in recent years was the creation of competitive bass fishing at the high school and collegiate levels. This move has really energized our sport, especially amongst our younger generation who will take the torch from us before we know it, and today I learned that they are definitely up for the challenge.

I had the honor and privilege of being a boat captain for the FLW/TBF High School World Championship of Bass Fishing on majestic Caddo Lake.  If you have never been on Caddo you are missing a real treat.  It is one of the most scenic and unique lakes you will find, but its bass fishing can be either feast or famine.

The tournament consisted of 46 anglers per age bracket and there were two brackets, 11-14 and 15-18 years old.  Anglers represented their home states, but only one from each bracket will bring home the title of World Champion of High School Bass Fishing.

The boat captains arrived at the Caddo Lake boat ramp at 5:00 a.m. for the safety and rules briefing. After the briefing, we were quickly paired with our anglers, and each boat had one angler from the 11-14 year age bracket and one from the 15-18 year bracket.  My anglers were C.J. Wehrmann, 16, from Illinois and Hunter Porter, 13, from Alabama. Jokingly, the first thing I asked Hunter was how I ended up with a Bama guy in my boat and Hunter’s response was “Roll Tide”.  A typical Bama fan’s response to almost any question. Are they taught that in pre-school down there?  On a serious note, our deep rooted Bama/Vols rival was erased by our common passion and love for the great sport of bass fishing.

After being paired, we were quickly backed into the water by FLW/TBF personnel.  Then, we awaited the singing of the National Anthem, invocation and our turn to launch.  We were boat number 18 and when our turn came we blasted towards the angler’s first fishing spot in my BassCat.

The first thing I noticed was that these anglers were polite, respectful and positive.  Before we even dropped the trolling motor, Hunter said “One thing is for sure, we are going to have fun today whether we catch fish or not”.  I quickly learned that these anglers were much more mature than their ages of 13 and 16 suggested.  Another thing I noticed was their passion for the sport, many kids their ages talk about the newest video games on the market, but all day these kids talked about the newest spinnerbaits, soft plastics and rods on the market, their favorite technique, or favorite lake to fish.  Their talk the entire day revolved around bass fishing.  Like me, it’s in their blood. 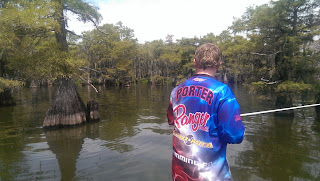 We made an eight-mile run to a location where Hunter had caught them really well while pre-fishing the week prior. After dropping the trolling motor, the anglers began to fish. By the rules, C.J. got the front of the boat first, and Hunter got it the second half of the day.

It took me about 10 seconds to realize that these anglers were representing their states for a reason…THESE KIDS COULD FISH!  I expected them to be good, but didn’t realize that they would be at this good.

Their first spot was a lily pad field mixed with grass.  Hunter and C.J. both began by walking the dog with hollow body frogs and did so like pros.  Hunter began switching back and forth with the frog and a Homer’s Clown brand spinnerbait.  Their casting precision was amazing.  As the day went on the anglers flipped vegetation, threw chatterbaits, buzzbaits, jigs and various soft plastics.  Like seasoned anglers, they would change lures and try new presentations and varied their retrieves to entice the bass.  They knew exactly what to technique to choose for the given situation. 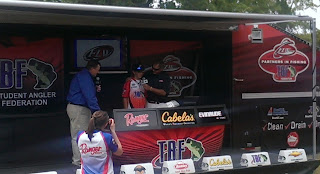 air temperature had severely affected the bite and shut the fish down.  Smartly, they decided to down-size their presentations and both threw shakey heads for a while.  C.J.’s ability to skip a shakey head under cypress tree limbs that were two feet off the water left me in awe; the kid was accurate!  Hunter was left-handed, but used a right-handed reel and would flip one-handed with his left hand…wow!

Unfortunately, Mother Nature didn’t corporate and the bite was extremely tough.  Not many kids had a good day and there is nothing that C.J. and Hunter could have done better.  When the fish aren’t biting, they aren’t biting and that rule especially applies on Caddo Lake.  It averages only six feet and drastic temperature changes can shut it down quickly.  That’s fishing, and these experienced young angers understood that.

Tomorrow is day two of the tournament and only the top few anglers from today get to battle it out for the title tomorrow.   When I asked the kids what they were going to do tomorrow being that didn’t make the cut and 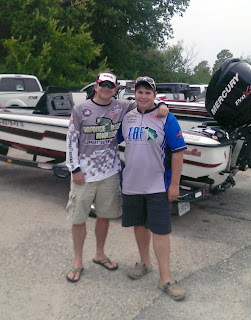 wouldn’t be fishing, Hunter replied:  “I am just going to relax and be thankful to God for this awesome opportunity to fish the World Championship of High School Bass Fishing”. Again, I was amazed.

Well, the fishing was slow, but we had a blast, and I must admit that I learned a couple of things from these two outstanding young anglers.  At the end of the day they got to walk across the stage and be introduced by Hank Parker which is a win in itself.

If all of the young anglers on the circuit are like C.J. and Hunter they will be beyond ready to accept the torch when their time comes.

See ya on the water,