NATIONAL HARBOR, Md. – During his final day on the Potomac River, Brian Maloney heard Coast Guard vessels cutting through the waves; he heard government helicopters buzzing overhead; he heard the thunder of a 21-gun salute. Nothing, however, compared to the memorable sound of a standing room only crowd cheering his victory in the Wal-Mart BFL All-American.

“I still can’t believe this,” an emotional Maloney said. “I didn’t think I had (enough).”

All three days, Maloney has leveraged the daily tide schedule by staking out a 75-yard stretch of shallow flats where ditches carved by storm water drains provide natural drop-back areas for fish on outgoing tides. All three tournament days saw outgoing tides from takeoff until early afternoon. Tides advance a little less than an hour each day, so the falling water scenario lasted progressively longer with afternoon incoming cycles starting later each day.

While rising water grants fish expanding access to shoreline cover, falling tides pull them away from the shallows and into deeper sanctuaries until the water returns. Comparing tidal fisheries to the seasonal floodwaters of his Midwest home, Maloney noted that the fish get nervous when they don’t have sufficient water over their backs. Knowing he’d face outgoing tides through most of the tournament time, he made finding low-water retreats his practice priority.

“Those ditches may only be a foot or two deeper than the surrounding flats, but it was enough for them to be comfortable,” Maloney said. “When the water started falling off the flats, the fish were coming to me.”

Although a chartreuse silent crankbait produced some of his fish, the top boater did most of his damage with a black Garneau Baits Slap Stick hand-poured paddle tail worm on a 5/16-ounce football
head jig. Maloney said he made long casts on 10-pound fluorocarbon line and used an aggressive presentation to startle and irritate bass into biting.

Sticking with his outgoing tide pattern kept Brian Maloney on top at the BFL All-American. (Photo by David A. Brown)

“I was ripping the bait – I wasn’t playing with them,” he said. “I wanted them to react to it. I was pulling it up off the bottom and hopping it 6-8 inches. I guess you could call it stroking a paddle tail.

“I looked around me in practice and everybody was finessing the fish and using green baits. I decided to go with a darker bait and a more aggressive retrieve. What I was doing, I thought was the right thing and it seemed like it turned out pretty good today.”

With an FLW Tour Major event running concurrently out of National Harbor, the BFL All-American field was restricted to fishing north of the Woodrow Wilson Bridge, while Tour anglers fished south. Every day, the All-Americans had to idle past the bridge en route to the check-in point, so the massive pilings presented an option for late-day limit fillers. Maloney said he took advantage of this giant fish-attractor each day of the event.

“I made a last-minute decision to run down to the bridge,” he said. “Every day I’ve been getting one that culled out. There’s one pillar out there that likes me for some reason. The first two days of the event, every pillar had 10-12 boats around it. The first one I pulled up to I caught three there. It was on the Virginia side, just a couple of pillars off the main channel.”

In 2007, the Northern Division Champion who advanced from the TBF National Championship 6 week before, Kevin Wells of Ohio won $70,000 as BFL Co-Angler Champion, which advanced him to the 2007 Forrest Wood Cup. 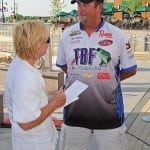 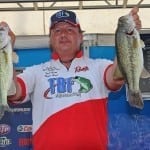 Downsizing his baits and slowing his presentations was important for second-place co-angler Robert Hime. (Photo by David A. Brown) 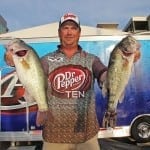 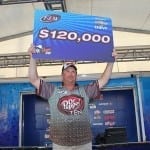 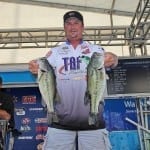 Boater Brian Maloney leveraged the outgoing tide to take the day-one lead at the BFL All-American. (Photo by David A. Brown) 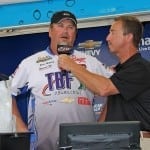 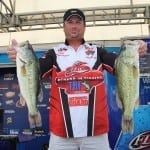 Sticking with his outgoing tide pattern kept Brian Maloney on top at the BFL All-American. (Photo by David A. Brown) 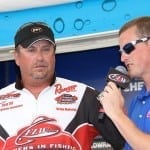 Top boater Brian Maloney caught most of his fish on shaky heads and a couple on crankbaits. (Photo by David A. Brown) 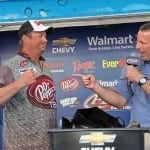 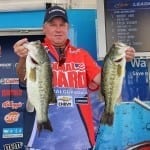 Second-place boater Marc Snyder started off strong with a 5-pound bass shortly after takeoff. (Photo by David A. Brown) 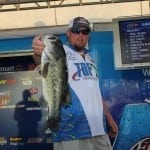