Fishing gets even tougher on Patoka Lake; Boyd comes from behind to seize a commanding lead

Fishing was tough on Patoka Lake, in Jasper, Ind., for these 72 TBF anglers; rough might be an understatement.  Through highs and lows, Boyd stayed consistent to seal the deal and win the championship.   Michigan fought hard to defend their title and came out on top, making them 3 -time Northern Division State Team Champions.  They’ve all battled it out to be called champions and advance to the 2011 Federation National Championship.  Today, 12 anglers advance, the top two from each state, to compete for over a quarter of a million in cash and prizes, and a chance to “Live the Dream” on the FLW Pro circuit for a year with use of a wrapped Chevrolet truck and Ranger Boat and all entries paid.

Overall winner, Allen Boyd, from Salem, Ind., caught two fish weighing 4lb 12ounces making his three day total 32lb 11ounces.  Boyd fished shallow water flippin’ tubes and casting chigger craws, buzzbaits, spinnerbaits and a couple of crankbaits.  “I fished hard and I fished super, super shallow, between 6inch to a foot deep.”  Boyd covered a lot of water in two small areas.  “The two areas were pretty close to each other and I just kept moving through the same water flippin’ the stump real shallow.”  Boyd also had a tough day on the water though he came out on top.  “I only caught two fish today, just doing a lot of what I’ve done the whole tournament.  But, the first two days when the sun got high they went super shallow. Today, we were dealing with some cloud cover and they spread out and weren’t as tied to the shallow covering; I did more scouting the flats.”  This

is Boyd’s first time to qualify for nationals.  “I haven’t really thought about it too much; I’m excited my two year old was here to see this.”

Finishing second overall and first in the state of Michigan was Don Watts, from Gowen, Mich.  Watts brought in two fish today weighing 5lb 15ounces making his tournament total 20lb 8ounces.  Watts caught his fish using Poor Boy’s Baits in the same areas he did the first day.  “I just want to thank Poor Boy’s Baits, Wave Spin Reels and BP,” Watts said.  Watts came up empty on the second day, but was able to find enough to make it happen.  “Again, fishing was tough; I couldn’t find them yesterday, but today they replenished in the same spots they were the first day,” Watts said.  For Watts, this is not only his first time to qualify for nationals but also his first time to make it to a divisional tournament.  “This is my first experience at both levels and it’s an awesome time; nationals are going to be a lot of fun.”

The very last angler to cross the stage today, Mike Johnson, from LaCrosse, Wisc., knocked out Don Watts for the tournament big bass with a 5lb 10ounce beauty to win the $500 big bass pot.

For the State Team Champions of Michigan the bragging rights keep piling on.  This is their 3rd division championship win in a row.  They caught 17 fish weighing 47lb today making their tournament total 127lb 8ounces.  “It was a total team effort this year,” Michigan TBF President, Jeff Cox, said.  “We came together and just fished as a team.”

Michigan’s team strategy is quite different than the other teams. “We don’t have team meetings.  Everyone just goes out there pre-fishes, finds their own fish and then fishes as hard as they can.”  For them, I think the motto “if it ain’t broke, don’t fix it” sums it all up.  “At the end of the day each team member’s efforts is what defines us; it’s worked for three years straight and next year we’ll see if it will work four.”

Indiana State team battled until the end but came up less than 4lbs short.  They caught 14 fish weighing 42lb 13ounces 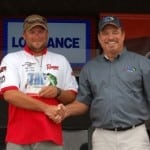 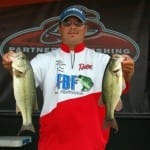 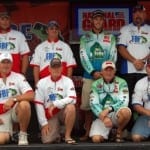 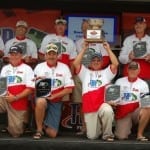