TBF National Champion who almost was not and the Louisiana Co-angler wins national titles at the Red River in Shreveport- Bossier City, LA.

Delaware’s Mike Morris Wins TBF National Champion’s title on the boater’s side with the $125,000 Live YOUR Dream Prize package and Louisiana Joshua Moore takes the Co-angler National Championship title and a $35,000 prize package. How they did it is the real story. 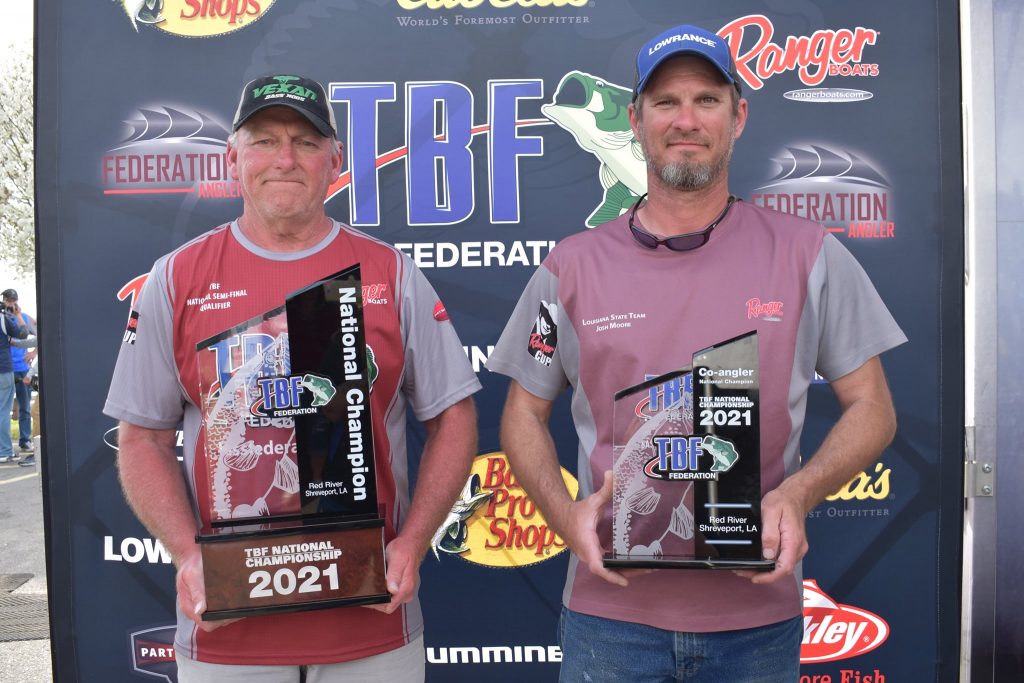 Every TBF state sent their top boaters and top co-anglers to Shreveport-Bossier City, LA to fish the 2021 TBF Federation National Championship on the Red River March 10-13.  There were a lot of obstacles, literally and figuratively. For one, the Red River was badly flooded back in 2016 and the fishing had suffered, but the Red River Waterway Commission has worked hard to restock and rebuild that fishery and it showed out this week for the TBF Championship anglers.

Fishing a new river can be tough enough as it is because there are lots of variables, backwaters, wing dams, oxbows and hidden lakes to find, locks and dams to deal with, barge traffic, and plenty to avoid as well like a plethora of submerged object and shallow water to get un-stuck from if you’re not careful. Oh yes and Alligators, there are plenty of Alligators on the Red River.

Two weeks prior to the event record cold hit the southern US and sent area temps down to near zero degrees for most of a week. Then the rains came and the river rose about 5-6 feet and along comes the TBF Federation National Championship as the river was on its way back down and dropping each practice day. There were floating logs in the river and debris to deal with. More than one boat hit submerged objects running outside the buoy line during practice days. Early in the week, the dock talk was not many bites and it won’t take much to win.

Championship anglers were not deterred, the sun was out, with temps up to 80 degrees the water was warming fast most of the week and at the day 1 weigh-in it was obvious that the fish had put the feed bag on for the championship anglers as they moved into the warm water.

The leaderboard was all over the map every day. For the last few years as the Red River is rebuilding a 14 bag was a very good day on the river, but not this week. 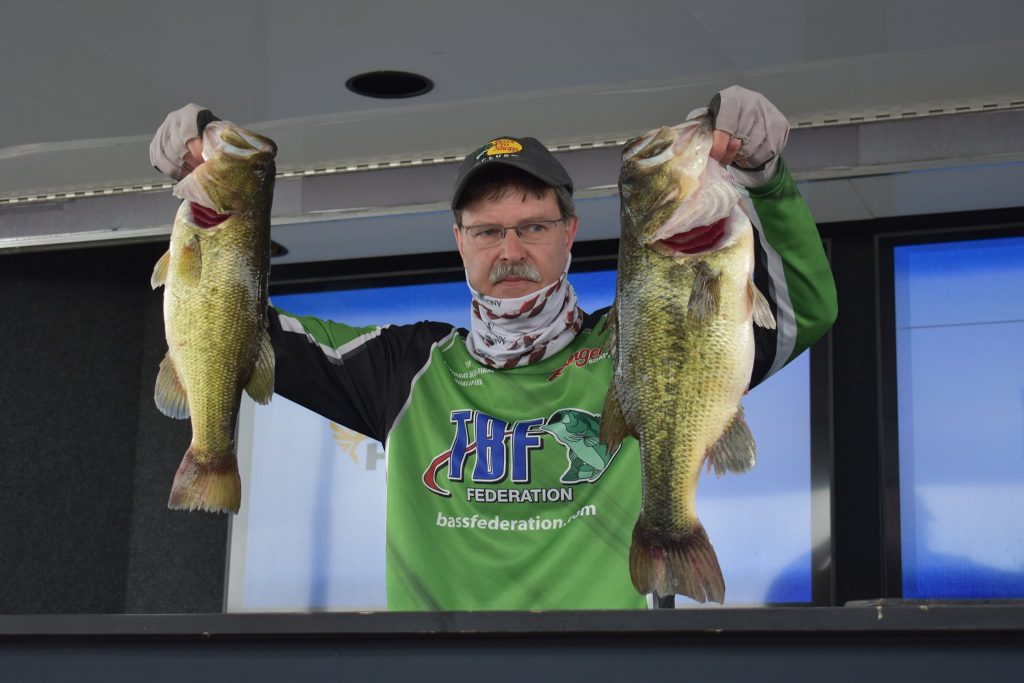 Partway through day 1 weigh-in representing the TBF Southern Division and the state of South Carolina as a Co-angler Scott Peavy brought in 5 fish from the back of the boat that weighed in 15 pounds 13 ounces, not long after that Mississippi boater from the Central Division Scott Whitehead brought in five for an unheard of 17-10 on the Red River. But the Red River was not done showing us just how good it is because before the weigh-in was over New York’s Boater Robert Stock set his bag on the scales and they weighed in at a Red River Record of 19-10.

Limit after limit by both boaters and co-anglers were weighed making it clear that the Red River is back!

On Day 2 again many limits and multiple big fish were weighed in, the largest of which was caught by Mark Corrente representing the TBF Southwest Division and his home state of California as a boater, his 7-pound 1-ounce big fish and Robert Stock’s day1 biggest fish of his 19-10 bag are the largest seen weighed on the Red River in years.

Day 2 of the Federation Championship is of course cut day, at the end of day 2 the boater and co-angler who leads their TBF divisions are crowned Division Champions and advance to fish on the 3rd and final day for the National Champions titles.  Those anglers advancing to the final day were: 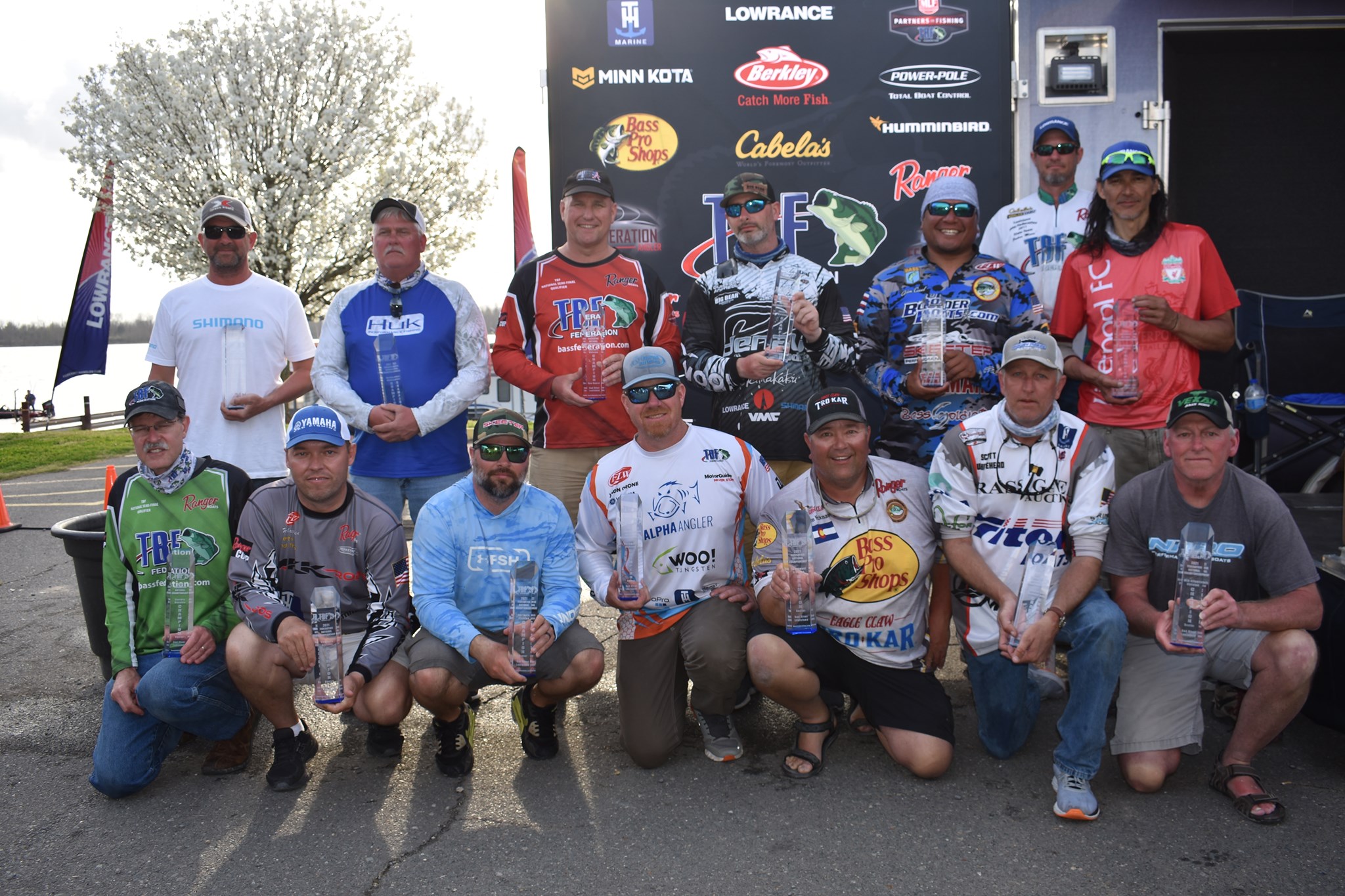 Saturday’s final day of the TBF Federation Championship went right down to the wire exactly like a final day should. 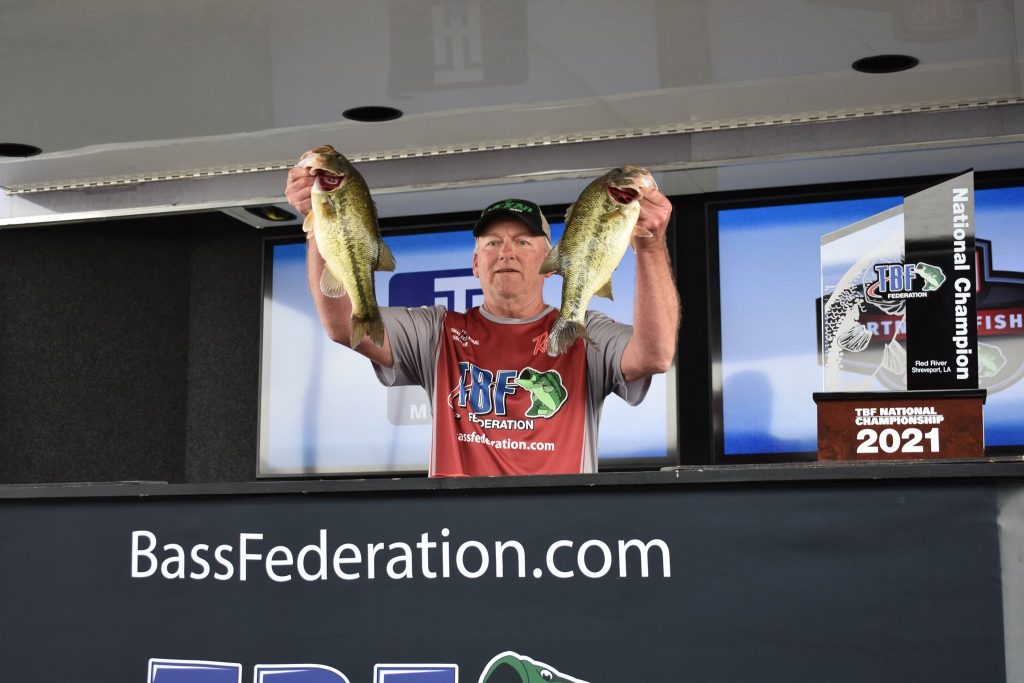 In the end Delaware’s Mike Morris, the angler who talked to his wife before the event and considered not even coming to a foreign place he had never been to, halfway across the US. Did he have a real shot at winning? Should he forfeit his spot and let someone else go? 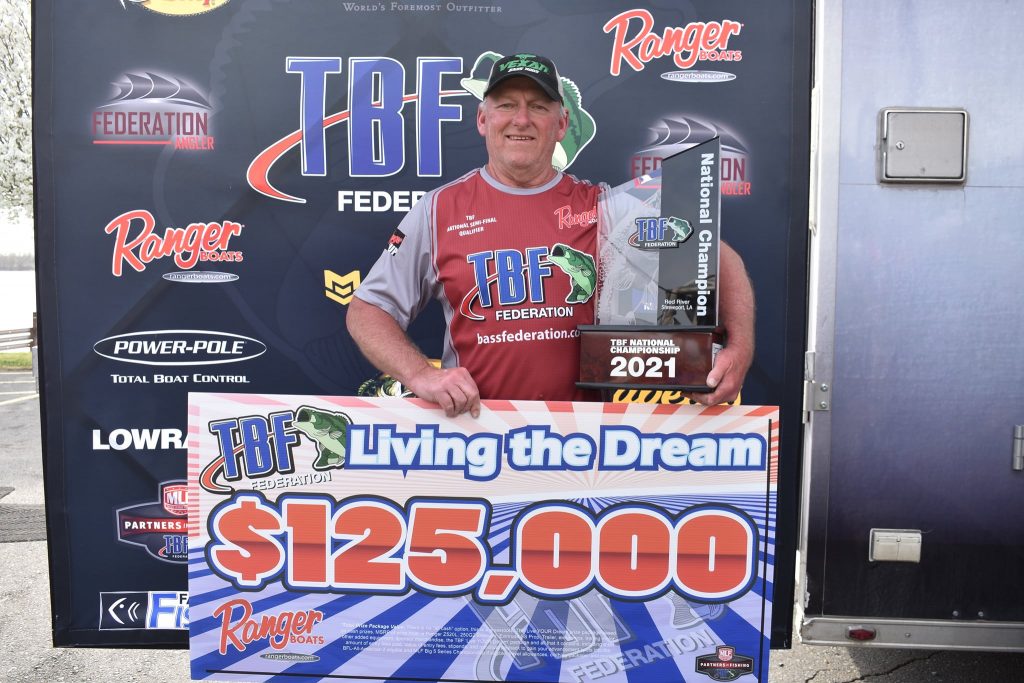 He made the correct decision and no one was more excited or grateful to hoist the National Champion Trophy and the $125,000 prize package check than Mike Morris was.  He truly is living his dream after his win.  You could say the key to his National Championship Title was consistency, he weighed in 13 pounds and 12 ounces on day 1, 14-09 day 2, and 13-14 on the final day for a total of 42-03 to top the boater field. The TBF Federation National Championship trophy along with the $125,000 Living YOUR Dream prize package consisting of $20,000 in cash, a new Ranger Z520, with 250 HP outboard fully rigged out with Lowrance electronics, MinnKota trolling motor, power poles, and more is his to keep. PLUS, up to $5,000 in paid entry fees to whatever he wants to fish to live his dream, travel stipend cash to help offset the cost to fish those events, a LYD clothing package, a berth into the 2021 BFL All-American, a berth into the 2021 Toyota Series Championship and a guaranteed spot in the 2022 MLF Big 5 Pro tour if he wants it and more.

On the Co-angler side, the performance was equally impressive, Louisiana Joshua Moore took home the Co-Angler National Champions title. 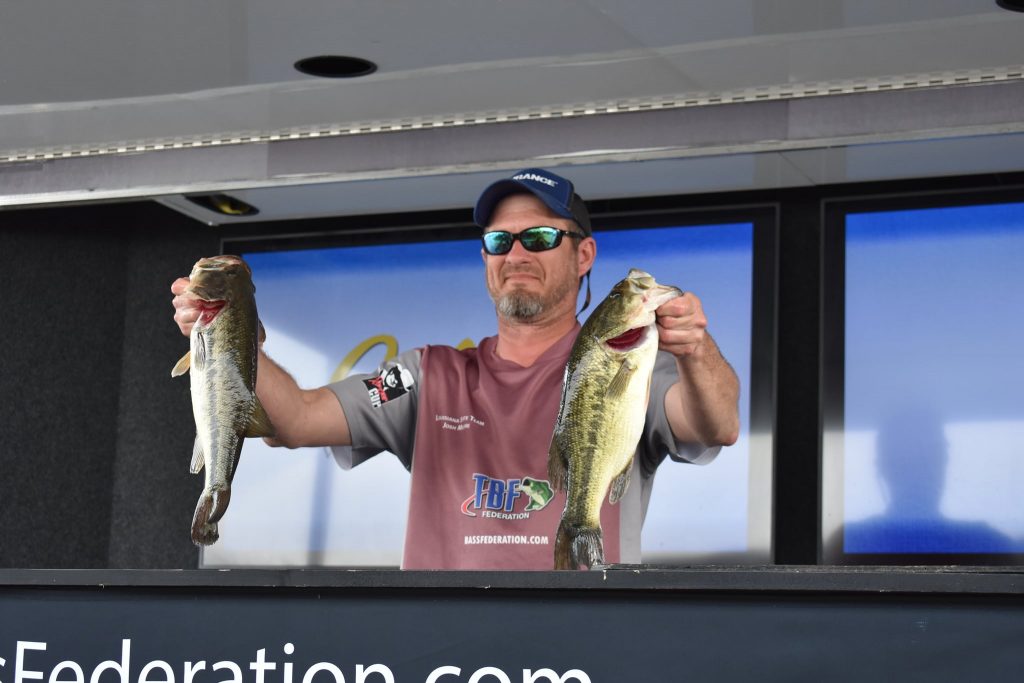 Winning a national event in your home state is very hard to do from the front of the boat much less from the back. As a co-angler, Joshua had to fish from the back of the boat and go wherever his daily boater took him. 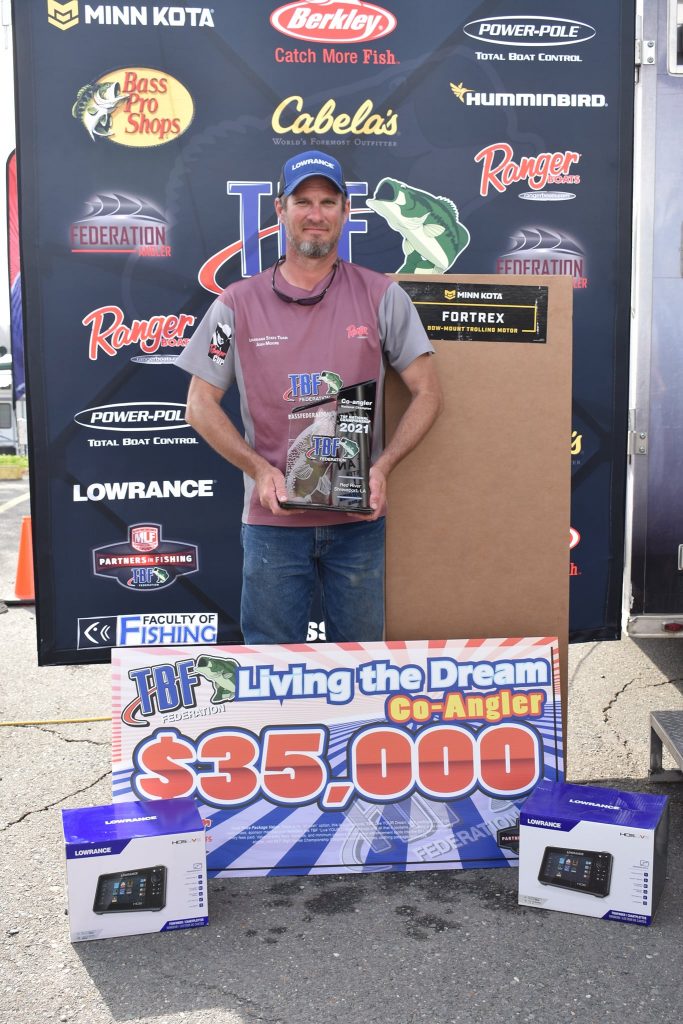 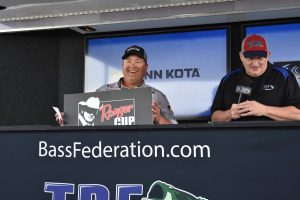 On day 1 he weighed in 11-06, on day 2 he had 10-11, and on the final day he brought in his biggest bag at 14-05 giving him a three-day total of 36-07 and enough to win the Co-angler title and the $35,000 prize package that went with it.  His prize package included his Co-Angler National Championship Trophy, $20,000 cash, a $2,500 entry fee stipend to fish whatever he wants to live his dream, with a travel stipend to help offset the cost to fish those events, along with a good start on equipping a boat including a MinnKota trolling motor, not one but two Lowrance units, a Power pole Certificate, a $500 Bass Pro Shops/Cabela’s Cash Card, along with a LYD clothing Package. PLUS, a berth into the 2021 BFL All-American Co-angler and a berth into the 2021 Toyota Series Championship as a co-angler, and more. 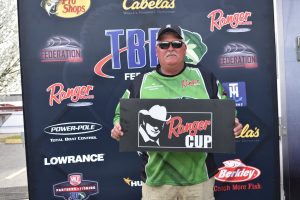 On the co-anglers side Ohio’s Don Ary finished in 4th place and as a Ranger Owner that earned him a $750 bonus.

The event was filmed for television to highlight TBF Federation anglers and our program and will air on Federation Angler TV on the Pursuit Channel, on Outdoor Action TV, and various other networks. In total the tournament awards for this event set another Federation record and was over $380,000 in cash, prizes, stipends, and bonuses, with every angler receiving a payout of some amount, and it included paid lodging for the official days for all anglers, Federation angler rods to all, Bass Pro Shops and Cabela’s gift cards to all anglers, cash boat gas stipends to all boaters and other championship memorabilia.

To find out how you can get started fishing TBF and earn a spot in the 2022 TBF Federation National Championship go to bassfederation.com  to contact us or click a link on the state federation’s page to contact your State Federation President.