The Bass Federation of South Carolina held it’s 2011 season opener this past Saturday  Feb.12th on Lake Murray. The unsettled weather we have been having had bass moving between deep and shallow water. But on this day the big ones showed up.  Several 5, 6, and 7 pounder’s were brought to the scales. Crankbaits seemed to be the main lure of choice however jigs and shakey heads also produced some limits that finished in the money.

1st place honors in the boater division went to Darrell Shull of West Columbia with a five bass limit of 16.02 lbs.   2nd place was Johnathan Crossland  from Irmo with another limit of bass at 12.58 lbs.  Chuck Kinard also from West Columbia came in third with 12.47 lbs.  Rounding out the top five were Robert Rikard with 10.39 lbs. and Pat Whaley at 8.84 lbs.  Big Bass honor was won by Rich Gerken of Prosperity with a 6.77 lb. lunker.

In the Co/Angler division it would be Tommy Lindler of Lexington taking the win with 4 bass weighing in at 10.53 lbs.  Second place finisher, DJ McEachern from Spring Hill had just moved up to fish the TBF trail from JR’s. program and showed that he knows how to catch them. His weight of 8.29 lbs was anchored  by a 7.33 lb largemouth that was also the biggest bass of the tournament. Way to go DJ.

Third place would be Kenny Grimes who drove all the way from Akron Ohio to fish. Says he doesn’t like fishing through little holes in the ice. Ken’s weight was 7.64lbs.  Also earning honorable mention for big fish are Dan Cook 6.49 lbs. and boater Bill Payne at 5.01 lbs.

Lake Murray gave up some nice bass this weekend and is sure to only get better in the weeks to come.  The next TBF tournament of the season will be at Lake Wylie on March 12th.  It’s not too late to enter. For more information please visit www.tbfofsc.com. 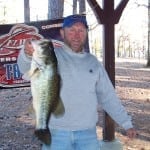 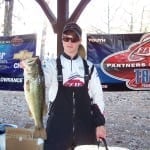 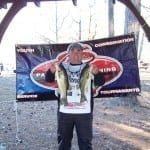 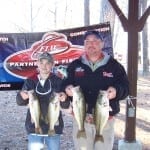 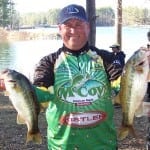