District 16 MA/VT is in the Record Book, Vermont wins State Pride Award for second year in a row

The District 8 TBF Semi-Finals has been completed. Day 1 was canceled due to inclement weather conditions, but day 2 was a great day to be on the water. The North Dakota Bass Federation was the host this year and the site was Lake Sakakawea docking from Dakota Waters Resort and Marina. There were 62 competitors (boaters and co-anglers) from the 3 states that make up District 8 which included North Dakota, South Dakota and Nebraska. With a state wide no-culling rule it added a lot more strategy planning and added a bit more anxiety for the anglers as to what fish to keep. Those who were on good fish knew what to hold out for and those who weren’t on big fish but quality fish found themselves throwing back fish that they should have kept. However, no matter the rule is or strategy any angler that qualifies it to the Semi-Finals is a good angler and rest assure there were plenty of good smallmouth caught. Congratulations to Kent Priel of Nebraska for being the overall winner for the boater division with a 9.01 lb weight. Another congratulations is in order to the overall winner in the Co-Angler division to Mason Big Crow of South Dakota. Mason brought in a bag of 3 smallmouth that weighed 7.55 lbs. 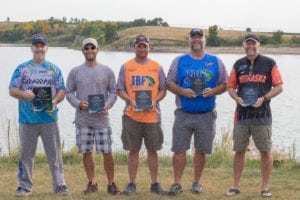 Top 5 on the boaters side 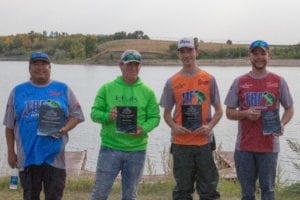 Top 4 on the co-anglers side

Full results can be found on the results page HERE: