The 2012 Northwest Division Championship presented by Cabela’s is underway on CJ Strive Reservoir, in Mountain Home, Id.  The championship is hosted by the Mountain Home Chamber of Commerce and includes 12 member state teams from five different TBF states.  These state teams are all competing this week for the 2012 Division Champion titles, both in the overall state standings and in the individual standings.  The top two anglers from each state, one boater and one co-angler, will advance to the 2013 Federation National Championship to compete for the national champion titles and the esteemed “Living the Dream” prize package, which includes paid entry fees as an FLW Tour Pro for the year and use of a wrapped Ranger Boat and Chevrolet truck.   Today, the home state of Idaho is out on top with 149lbs 15ounces.  Tomorrow, as the wind picks up on CJ Strive Reservoir 60 TBF anglers head out to fight for the top spots on day two of the 2012 Northwest Division Championship.

In the individual standings, also from the host state of Idaho is Jason Hickey with a five bass limit weighing a whopping 20lbs 3ounces.  “I had a day like I’ve never had at the lake, kind of unheard of; I definitely didn’t expect it,” Hickey said.  “I went out there with a goal of catching 13-14lbs.  It was just one of those days where the stars lined up and the good Lord was smiling down on me.”  Hickey was throwing a reaction bait combing through a big spawning flat where he’s found the biggest smallmouth this time of year.  “I went through the numbers, there’s a lot of fish there.  Tomorrow, it will be a grind and a struggle in the wind, but if I can get the bite, I’ll be set.”  Today, the wind was extremely calm but tomorrow 25-30mile winds are projected.  “I’m looking forward to the wind; I’m thinking blow baby blow.”

The second biggest bag was brought in by Eric Lippincott from the Wyoming state team with a five bass limit weighing 16lbs.  “It’s good fishing, lots of fish are up, lots of fish are running around; it went really good,” Lippincott said.  “I am a little worried about the wind but hopefully we will have a good day tomorrow.”  Lippincott has a few sweet spots where he’s hoping he can rack up another good bag of bass.  “Between the smallies and the largies I should be able to get another 12-13lbs; I think that will keep me in the hunt.”

In the overall team standings, Idaho leads it with a total weight of 149lbs 15ounces.  Oregon is in second with 110lbs 8ounces.  Close behind in third is Wyoming with 108lbs 7ounces.  In fourth and fifth, is Washington with 104lbs 13ounces and Montana with 101lbs 10ounces.

Fishing was excellent today with 53 of the 60 anglers bringing in full limits, tomorrow they’re hoping the wind doesn’t get in the way as the 2012 Northwest Division Championship presented by Cabela’s continues on CJ Strike Reservoir in Mountain Home, Id. 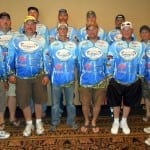 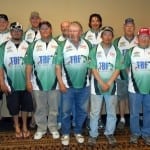 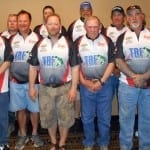 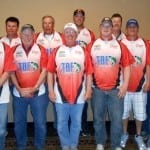 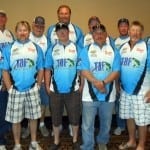 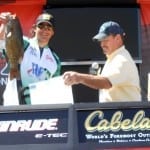 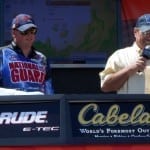 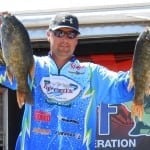