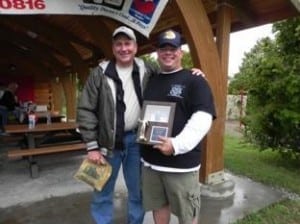 This event was held for a very special group of military service men and women   assigned to the Army Wounded Warrior Program at Fort Eustis.  This program specializes in assisting the severely wounded, injured and ill Soldiers who are recovering from an injury or illness resulting from their service in the Global War on Terrorism.
Each participant was treated to a day on the river guided by a seasoned Region 8, Virginia Bass Chapter Federation Angler and was followed by a picnic and social at the Chickahominy Riverfront Park.  Although the day was a bit cool and damp, everyone’s spirits were lifted with the enthusiasm shown by each participant. Battling rain and extremely high tidal flow, not all caught fish, but the federation boat captains said they enjoyed spending the day on the water with each of the Warriors. The days fishing activity ended with a bass fishing tournament style weigh-in for each Warriors largest fish.
SPC David Amore, hometown – Newark, OH, joyfully received the Big Fish Award for his 5.41 pound largemouth bass.
Other notable catches were:
Sergeant Jeremiah Stewart of Petaluma, CA – 2.46 lbs. Largemouth Bass
Sergeant Marcos Rivera of New York, NY – 2.10 lbs. Largemouth Bass
This event was made possible through the efforts of volunteers from the 5-Rivers Bass Masters, Eastern Virginia Bass Anglers, NASA-Langley Bassmasters, Peninsula Bass Anglers and the following sponsors that provided either goods or services in support of this event:  The Wright Bait Company, James City County Parks and Recreation, Solar Bat, Target, The Bass Federation, FLW Outdoors, Oakley, Mr. Sooperbass Bait Co., Strike King Lures, Bass Pro Shop, The Army and Air Force Exchange Service (AAFES), Pepsi, Green Top Sporting Goods, and Trophy World Inc. of Newport News.
As Americans, we all greatly appreciate the service and sacrifices of our military service personnel.  It was our pleasure to serve those who serve us so well. 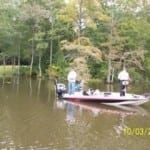 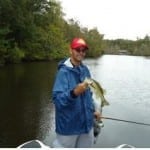 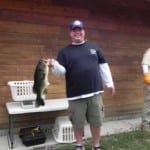 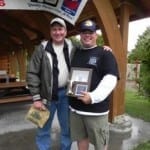