Ponca City, OK. (November 7, 2022) – The Bass Federation (TBF) announced today that 102 of the nation’s top grassroots anglers will get their chance to “Live Their Dream” at the 2023 TBF Federation National Championship to be held on Missouri’s Lake of the Ozarks, March 29-31, 2023.

“The Federation Championship has been held on many storied bodies of water over the decades and 2023 will be no exception.  Lake of the Ozarks has always been an angler favorite; in fact, I love to fish it myself.  It has come up on our surveys many times, so we are excited to partner with the Tri-County Lodging Association to make it happen.”  Stated Robert Cartlidge, TBF Federation National President. “Lake of the Ozarks is a destination lake that consistently produces, and has lots of things for everyone and their families to do while in the area.”

The March time frame on Lake of the Ozarks will be pre-spawn, and it should take a solid limit every day to do well there. The impoundment has a plethora of things to fish and will fit any fishing style.  TBF anglers competing in the “no entry fee” event will also enjoy stellar payouts where the prize purse will push $400,000.00 in cash and prizes due to the growth and success of the Federation’s close-to-home low cost TBF National Semi-Finals program that qualified all the anglers to get here.

Missouri High School State Championship in 2023.” Stated Lagina Fitzpatrick, Executive Director, Central Missouri’s Tri-County Lodging Association. “This is a new partnership, and we look forward to a successful event and many more collaborations in the future. We know the anglers will enjoy fishing in our little piece of paradise and anxiously await their arrival in spring of 2023!”

Competitors have qualified at 21 close-to-home district competitions in the TBF’s National Semi-Final system that span the traditional seven TBF geographical divisions.  The framework is designed to make it easier for TBF anglers to fish premier events by minimizing travel time and expenses. As noted because of the success of the new TBF National Semi-finals program, payout to the membership continues to climb annually.

All fifty-one boaters and fifty-one co-anglers competing in the National Championship will fish the first two days of the event and only the 7 Division Champion boaters and 7 Division Champion co-anglers will compete on the third and final day for the Living Your Dream Prize packages and the National Champion boater and co-angler titles.  In addition to the cash prizes, all anglers will receive a hotel room stipend from TBF for the actual event days as a part of their qualifying prize. Additionally, all Boaters will receive a cash fuel stipend to help offset their boat costs. All 14 finalists can earn a Living YOUR Dream prize package of various sizes, and can advance to the 2023 BFL All-American if they are qualified.

The National champions and overall winners will leave with the coveted TBF National Champion Boater and National Champion Co-angler Titles and a Living Your Dream (LYD) package. The boater National Champion’s LYD package is valued in excess of a whopping $125,000 in cash and prizes including a brand-new Ranger Z520 powered by Mercury 250HP outboard engine, Lowrance Electronics and MinnKota Trolling Motor rigged out and all their own to KEEP!  PLUS, a significant CASH prize, paid entry fee stipend into whatever they want to fish and much more!

The Federation strongly believes in the value of co-anglers, so the 2023 National Champion Co-Angler LYD package will be worth over $30,000, including 20K cash PLUS set paid entry stipends into the circuit of choice, and more!

Coverage of the TBF National Championship will be broadcasted in high-definition in the Federation Angler TV block on the Pursuit Channel, on Outdoor Action TV and streamed live from the Lake of the Ozarks event daily on bassfederation.com.

For more information about Lake of the Ozarks, please contact:

The Bass Federation Inc. is the oldest and largest, organized grassroots angling organization in America and a member of the fresh water fishing hall of fame. TBF is 100 percent owned by those it serves and is dedicated to the sport of fishing. TBF affiliated state federations and their member clubs conduct more than 20,000 fishing, youth and conservation events at the local level each year, and have provided the foundation for the entire bass fishing industry for 50 years. The Bass Federation is proud “Partners in Fishing” with industry-leading companies including Ranger Boats, Lowrance, Bass Pro Shops, Cabela’s, Humminbird, MinnKota, Berkley, T-H Marine, MLF, Power Pole, Lew’s, Strike King and FacultyOfFishing.com. For more information about The Bass Federation, visit bassfederation.com, or call 580-765-9031. Look for TBF on facebook at Facebook.com/thebassfederation and on twitter at Twitter.com/bassfederation.

The 2022 District 1 National Semi-finals was held October 8th and 9th on the Harris Chain of Lakes. It was a tough weekend due to the loss of two very important people in the fishing community. We lost Mr. Ed Fry and then one week later we lost Mr. Jeff Zesiger. Our hearts were heavy, but I know they were watching over us all.

Congratulations to Raymond Trudeau and Jon Christian from Florida and Jon Gagnon and Jeffrey Hickman from Georgia.  They will advance to the 2023 TBF National Championship.

We also want to recognize The Inn on the Green. They placed pictures of Ed and Jeff in their lobby, along with welcome notes in each anglers’ rooms. Their act of kindness goes a very long way. For full results and photos CLICK HERE 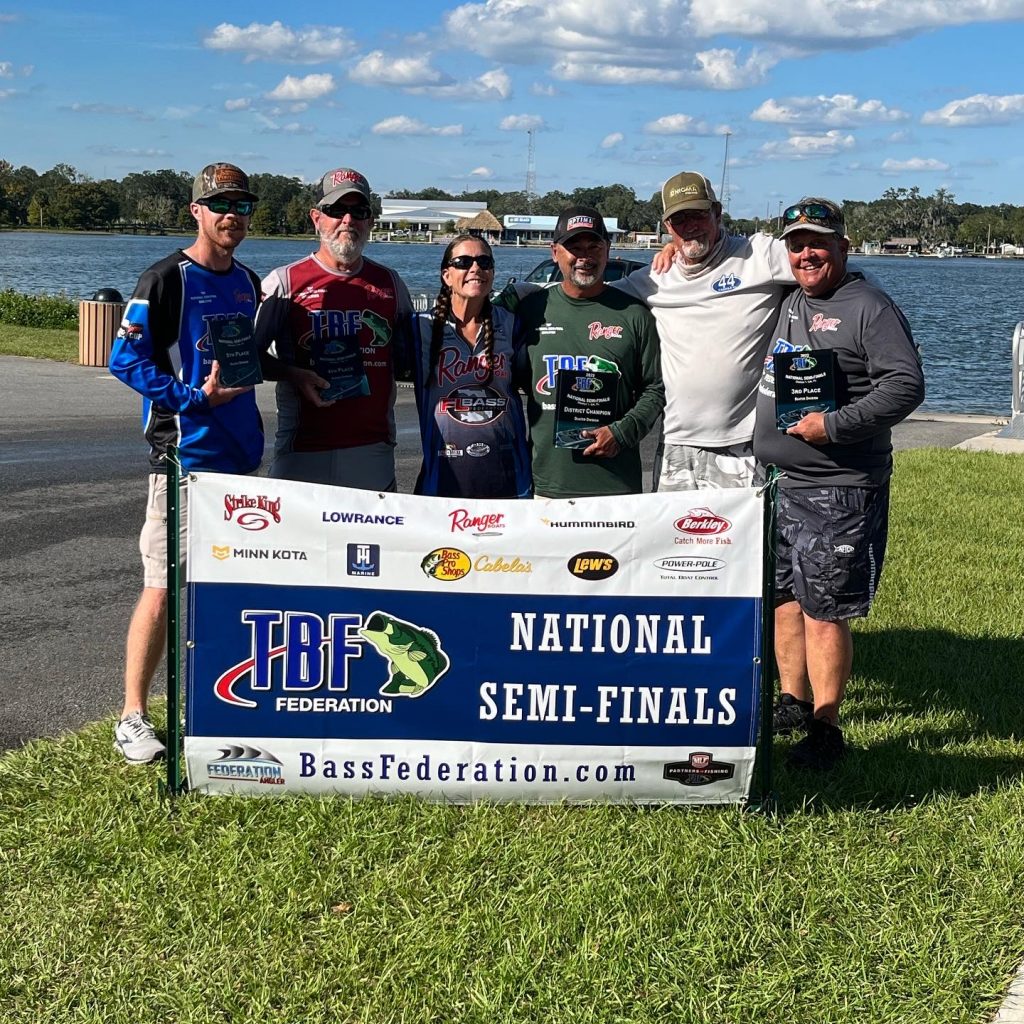 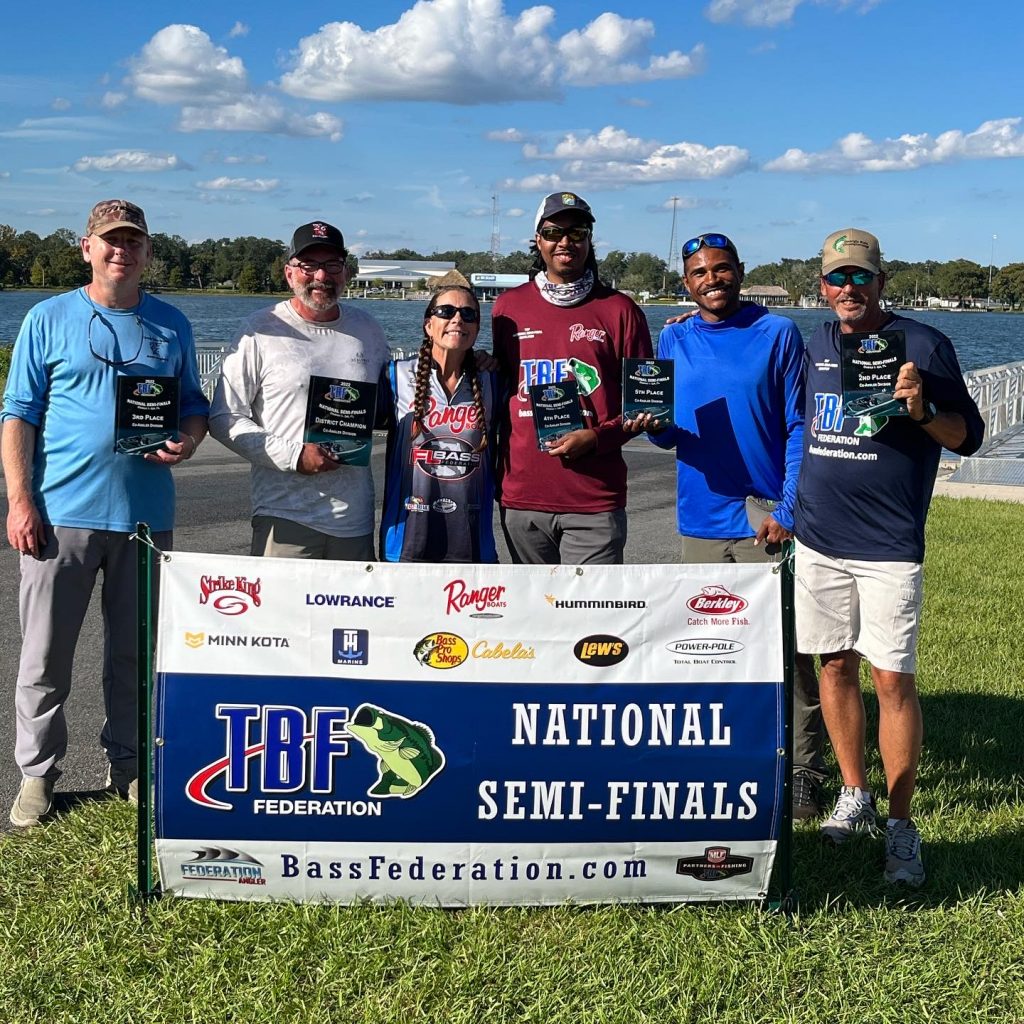 On the evening of September 16, 144 anglers met at Fisherman Central in Port Clinton, Ohio at the meeting before beginning an adventure that could change one angler’s life. After a rules and pairing meeting, they were all left with high hopes of a five fish limit on Saturday.

After Saturday’s weigh-in the top boater was Pat Upthagrove of Michigan with 22.23 pounds. The top co-angler was Mark Greco of Ohio with 14.79. However, this was soon to change for some as wind was predicted for Sunday that might affect the offshore bite.

Sunday proved to be typical of Lake Erie with the wind gusting to 20mph from southwest by noon.  Anglers were warned to plan accordingly. Weights were less on Sunday but when the scales were closed Pat Upthagrove held onto his lead and outdistanced 2nd place Dave Slonaker with 41.94 pounds for two days. Pat Upthagrove of Michigan qualified for the TBF National Championship from Michigan. The Top co-angler was 18-year-old Dylan Phillips of Ohio with a total for 2 days of 24.53. 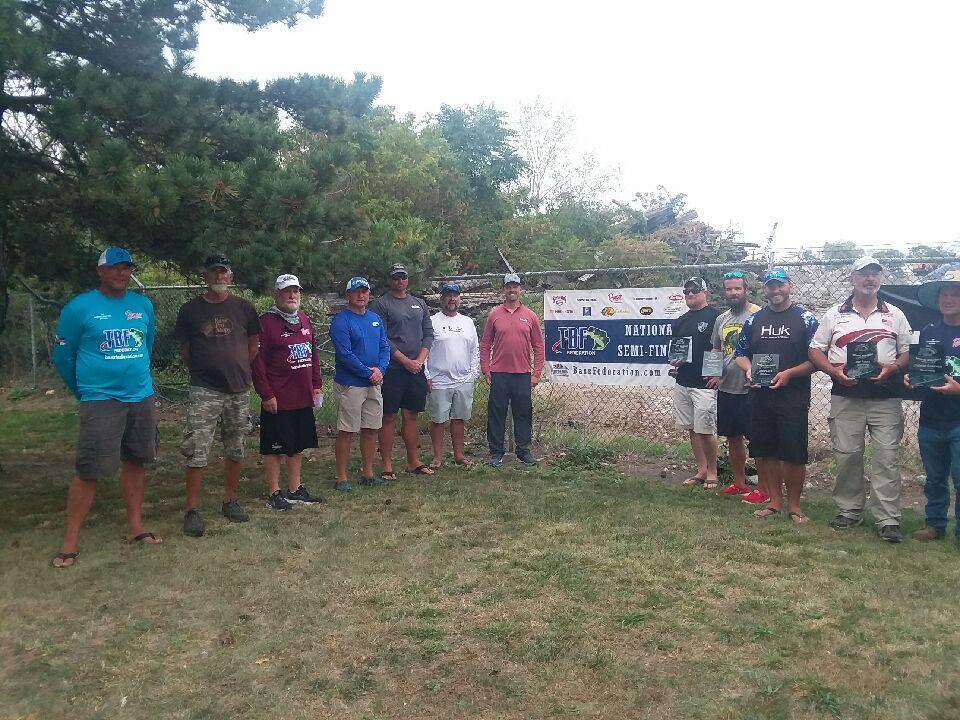 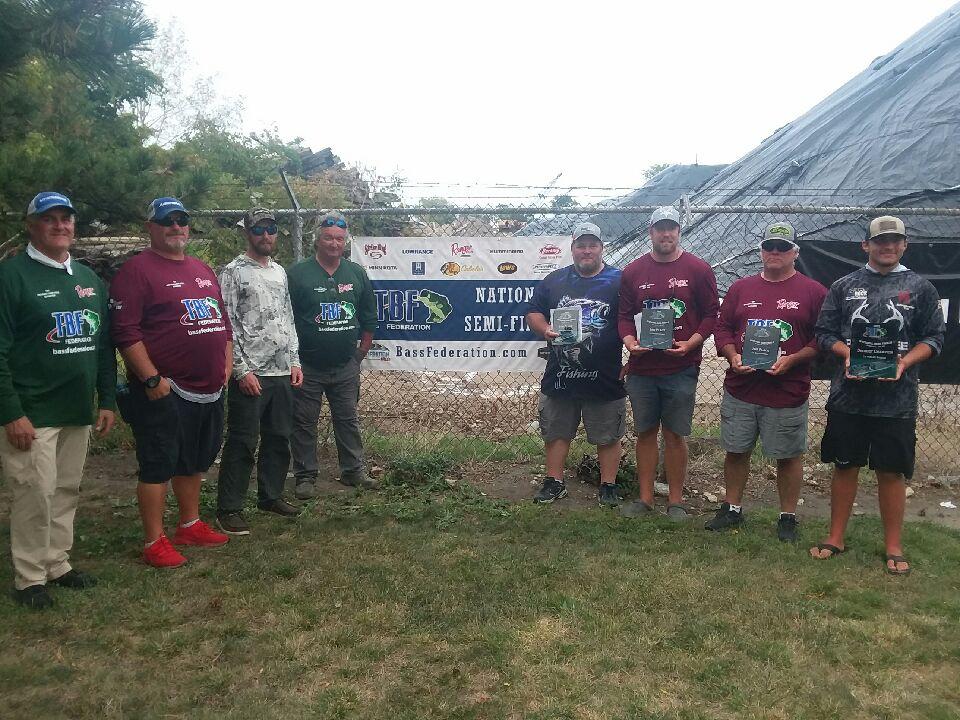 Well for the third year in a row, Ontario TBF, (Canadian Bass Anglers Federation). Missed the opportunity to join New York TBF and Pennsylvania TBF, due to border restrictions. None the less 25 boaters and 25 Co- Anglers made the trek to the Host City Port Colborne Ontario, and Sugarloaf Marina on the shores of Lake Erie.

Practice started Wednesday and the competitors got on the water to get a feel for the lake. Friday evening’s Registration and rules meeting held at the Belmont bar and grill ran smooth and was full of excitement, with Anglers anxious to see who they would be paired with for the weekend.

Saturday’s start arrived with great weather conditions and flight one blasted off at 7:00 am followed by flight 2 at 7:20 am.  As the scales closed on opening day Andrew Shufelt was leading on the boater side with a massive 4 fish limit of 20.38 lbs. In second place was Mike Loughlin a ways back with 17.42 lbs. On the co- angler side, CBAF President Sean McLaughlin held a narrow lead after weighing in a 4 fish limit for 13.80 lbs

On Sunday we woke up to high winds and big waves, so we moved the launch to the Upper Niagara River. A good portion of the field had little experience on the river or none at all. So, an interesting day was in store for everyone.  A strange day for weather with clouds then sun then rain and of course some blustery winds. At the scales the talk was positive from the anglers who had better than expected days.

When it came time to announce the winners Mike Loughlin on the boater side made a huge comeback by weighing in a day 2 bag of 4 fish for 14.14 lbs for a total of 31.56 lbs  catching day one leader Andrew Shufelt who put 31.13 lbs on the scales over two days. As close as it gets and a big congratulations to Mike Loughlin on the win and a trip to the TBF National Championship next February, location TBD.

On the co-angler side the race was getting tight after some impressive early weights from the field. Day one leader Sean Mclaughlin was the last to hit the scales. Sean put his 4 fish on the scale for a total of 11.71lbs for a two-day total of 25.51 to claim the championship narrowly edging out second place co angler Jiancheng Guo who brought the biggest second day bag to the scale of 15.38 lbs for a two-day total of 24.06.

To end off the day Mike Loughlin also running a Ranger boat won the ranger cup money, a big thank you to all our sponsors and host City Port Colborne, and of course all of our volunteers who make each event run smooth and safe. 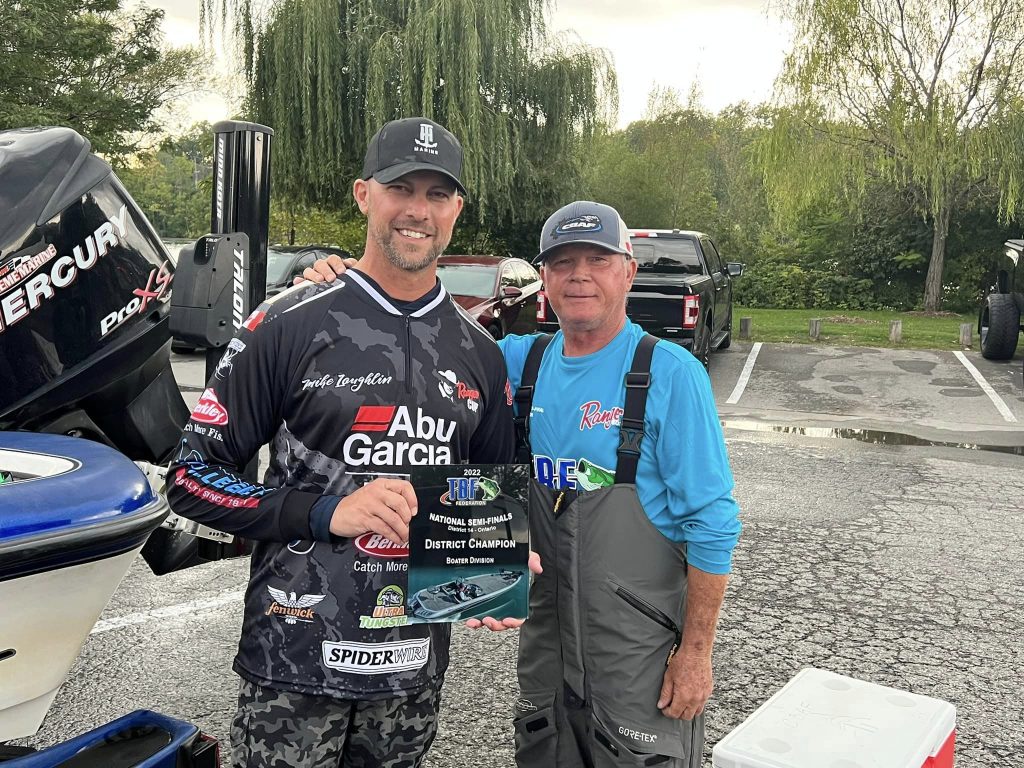 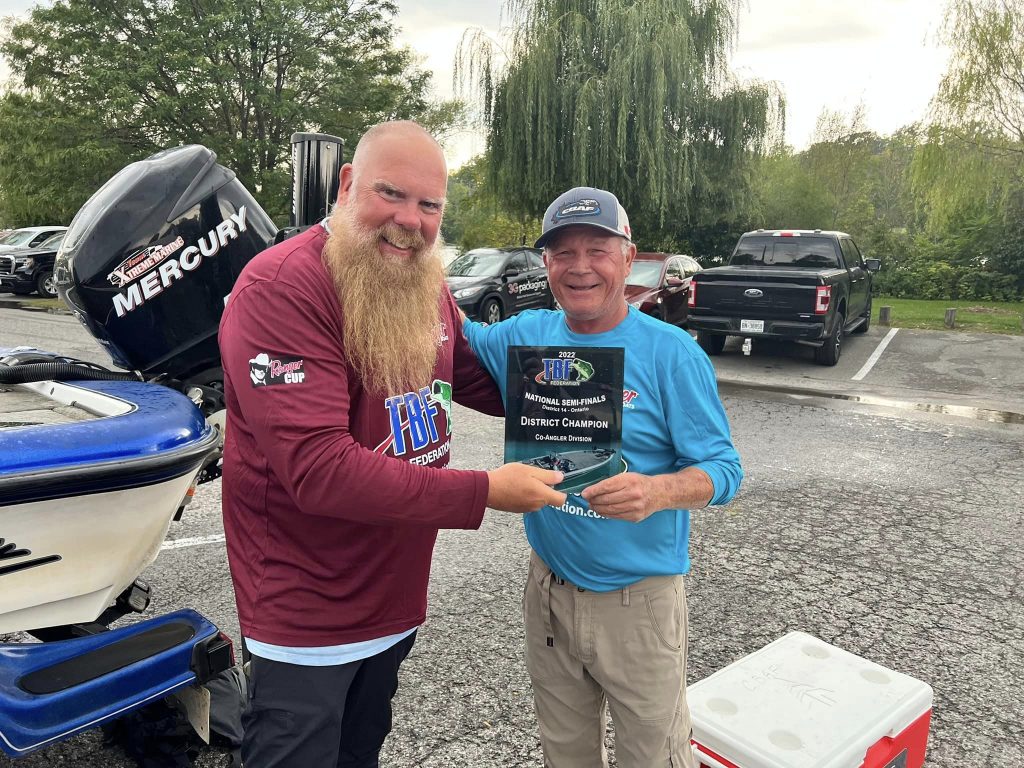 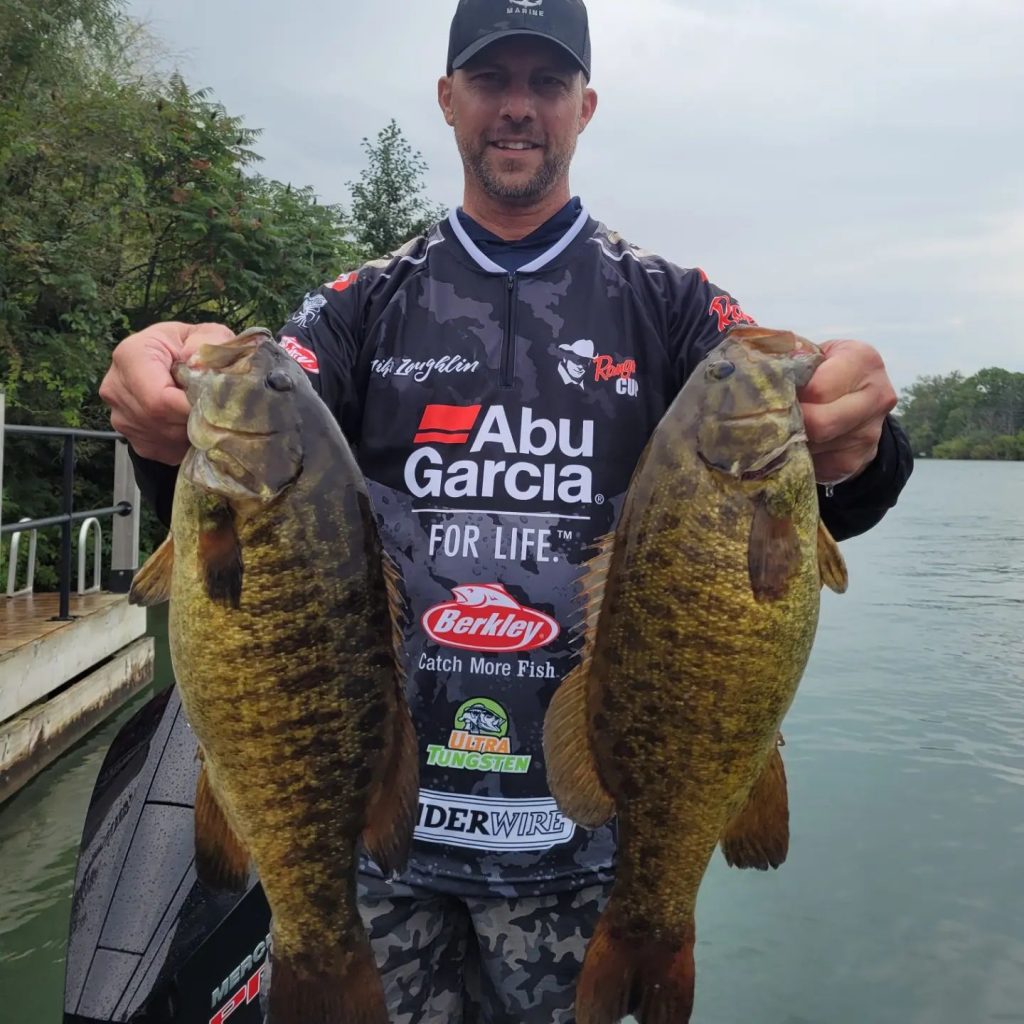