It is October 9, 2020 5pm and Registration is well underway.  The Tournament Director was set up early and ready to register all the Anglers as they came through.  The first step was check-in and they were given a copy of the local rules.  Once checked in, they worked their way down a line spaced out due to Covid-19.  The next step was to verify Ranger Cup with Bobbie Littlefield, who was in charge of the computer and the information for the tournament.  Following her, Scott Lepka was handing out jerseys each angler earned along with the Lowrance Hats and TBF Gators.  The last station anglers picked up their motor bands to identify they are in a contest, which is required in Idaho, and get their pairings and boat position.

A short briefing was given to all the Anglers following the check-in to go over all the local rules and answer any questions the anglers had.  As the briefing was coming to an end, Jennifer Stocke, Manager of Black Sands said food was ready.  She set up a buffet style dinner with homemade chicken fried steak, mashed potatoes, green beans, and a small desert.  It was excellent.

Early arrival for Day 1 of the competition.  As boaters launched their boats, they passed through a small channel where they demonstrated their kill switch, lights were verified working and all live wells were operational.  At 7:30, the National Anthem played, official time was briefed and boat 1 was sent.

While all the anglers were out fishing, it was time to set up the weigh-in site.  Banners were hung, weigh table and scales set up and then tested to ensure a smooth and quick drive through weigh-in.

The first boat returned around 3:45 pm.  Joseph Graham was out at the no wake zone checking each boat as they came in to ensure no late arrivals.  Boats of all different shimmering colors sped in from the lake, whitecaps trailing behind them. The first flight all arrived on time.  The anglers put their boats on their trailers and proceeded to the weigh-in in front of Black Sands Resort.  As they finished loading their boats, the second flight started to arrive.  Same as the first flight, all boats from the second flight check in on time as well.

All day long it had been nice, with 5 mph winds, and because it was cloudy all day, it gave the fish ample opportunity to bite.  Once weigh-in got underway though, the once calm wind started to pick up, blowing at a bitter and distracting 15-20 mph.  In order to block the wind, a vehicle was brought around and a large heavy cooler was placed on the table with the scales.  Because of the wind, the scales took a little longer to lock in.

The first boat pulled up to the scales where they were handed 2 weigh bags.  Once all the fish were bagged, the anglers brought the fish up to the scales where they were put in a tub of water so they could be looked at and verified for length and liveliness.  Wendy Dawn handled the fish with great care and placed them in the weigh basket while Scott Lepka weighed the fish and called the weights.  Simultaneously, a bucket was filled with water and put back into the angler’s bag.  Boat number and Angler name were announced to Bobbie Littlefield and as soon as Littlefield recorded the weights, they were automatically printed and a copy was given to the anglers.  The anglers then took the fish to the release boats where Joseph Graham, Dan Chandler, and John Lindstom were waiting.  Each release boat made two trips to release the fish at least a mile from the weigh-in site and away from any bank access.

A total of 232 fish were brought in to the scales, 229 were released alive totaling 442.62 lbs.  Each of the release boats made two trips as to not overload the fish and get them back into the lake as soon as possible.

Every angler weighed at least one fish on Day 1.  So far, the Top Angler of the tournament after Day 1 is Charley McMurdie from Idaho, weighing 5 fish for 17.13 lbs.  On the Co Angler side Glenn Parsons has a weight of 13.69 lbs.  The top Montana Angler for Boaters is Douglas Stiffarm with 14.11 lbs. and the leading Montana Co Angler is Hunter Dahnke with 11.18 lbs.

At 11:30 pm on Day 1 of the tournament, it has been raining nonstop for the past 3 hours.  This is the first significant rain in over a month, as Idaho does not get much. It is forecasted to rain until 2 am.  Because of this, the ambient temperature dropped into the 40’s, and this nonstop rain has the potential to adversely affect tomorrow’s fishing.

On Day 2 of the National Semi Finals between Idaho and Montana, boats start arriving at 6:15 am.  Today feels calmer than yesterday with clear skies and light 5 mph winds.  A Co Angler did not show this morning, and they were unresponsive to any phone calls.  Jim Davis stepped up to fill in so no unlucky Boater had to be pulled from the tournament.  Boat checks were conducted, the National Anthem played and blast off was at 7:50 am.  For today, the order was reversed from Day 1, as boat 27 went out first and the rest followed from the no wake zone.

Today, anglers also started to return a little early for weigh-in.  Everything is set up and ready, and to make things smoother than yesterday, a few more volunteers helped with the weigh-in.  Russ Littlefield, XXXX Chandler, and Marshal Currothers helped with pictures and taking the fish to the release boats, while Erika Brandt took the pictures of the Anglers.

The weigh-in showed the fishing was a little tougher on Day 2. Boater Charlie Mcmurdie said the fishing on Day 2 was “good, but yesterday was better.” With his biggest catch of the day being a whopping 4 lbs. While Angler Kelly Lee was quoted saying, “The fishing was great, the catching was horrible.” His catch was also about 4 lbs. 203 fish were brought to the scales on Day 2 with a total weight of 364.03 lbs.

Combined for both days, 435 fish were released alive, but 6 were dead.  Most Boaters and Co Anglers interviewed stated dropshots were the bait that caught the most fish, while Boater Roger Stringer said he had the best luck with chatter baits. A total weight for the tournament was 800.47 lbs. 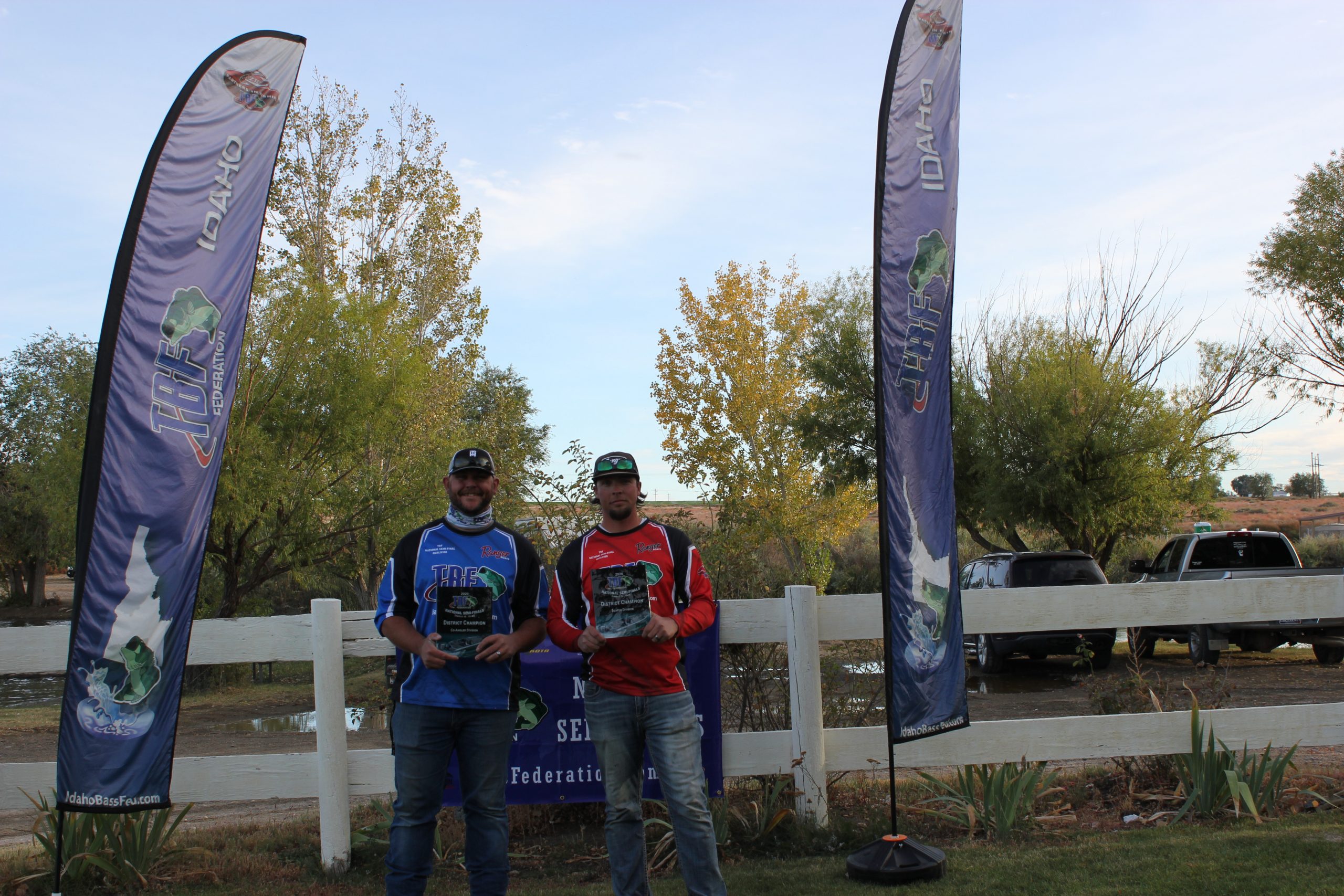 Following the weigh-in, final scores were calculated and the top 5 Boaters and Co Anglers were announced.  The Anglers were all fishing in order to move on to National Finals and Two Boaters and Two Co Anglers were identified.  For Idaho, Charlie Mcmurdie brought in 30.49 lbs. to win the tournament as a Boater, and he will represent Idaho at the National Tournament.  And Idaho’s winning Co Angler was Torrey Tucker whose fish weighed a combined 20.23 lbs.  The top finisher for Montana’s Boater was Jason Crone with a combined weight of 18.43 lbs, and the top Montana Co Angler was Cher Moua with a combined weight of 18.62 lbs.  Since Cher’s combined weight is greater than the Top Boater for Montana, he will most likely have an option to go to Nationals as a Boater. 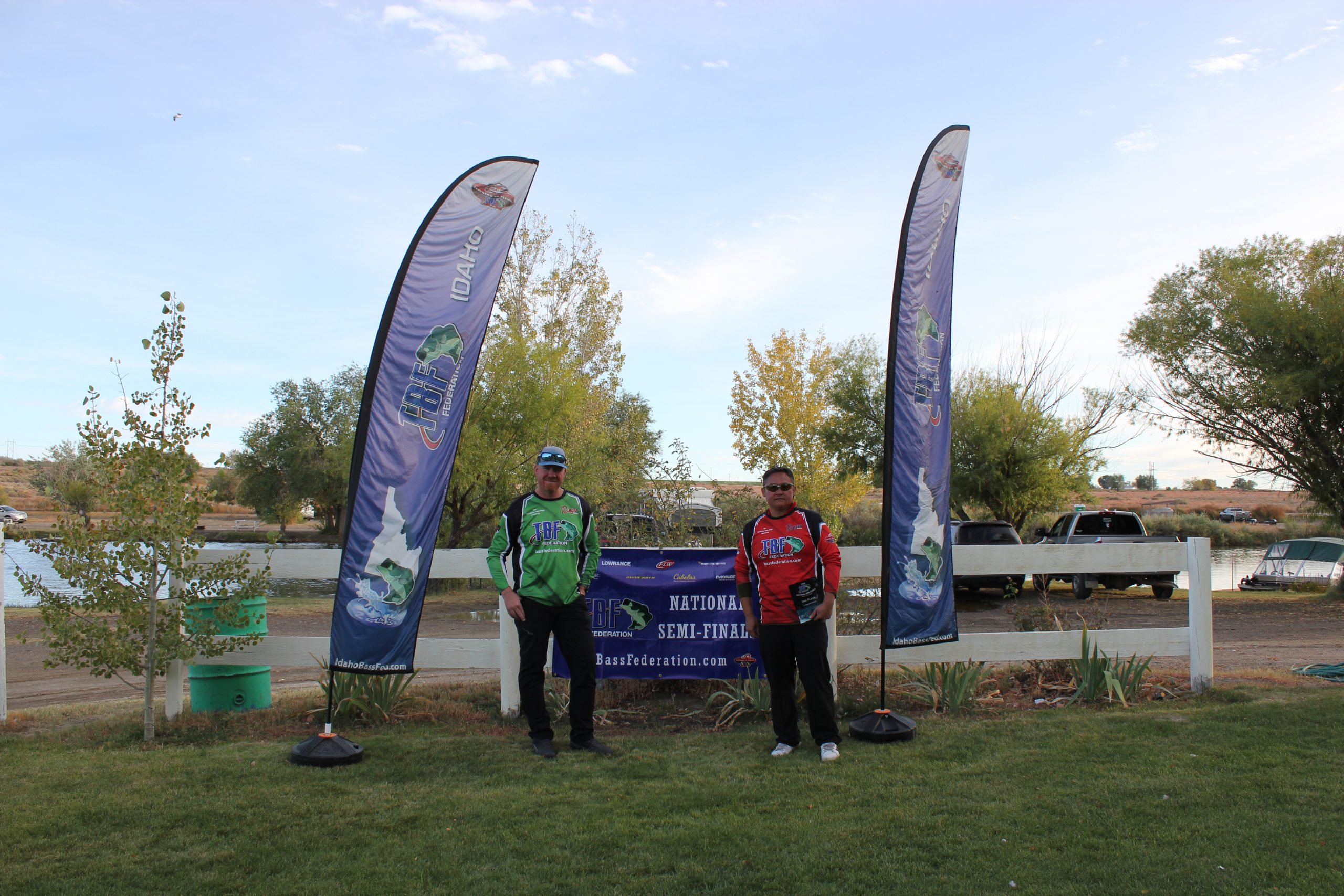 Good luck to all at the next level of competition.

A big thanks to everyone who helped out with the tournament.  It wouldn’t have run as smoothly as it did without everyone’s assistance.  With another thanks to the Black Sands Resort for their support and good food.