The 2020 tournament for the TBF District 6 National Semi-Finals involving Arkansas and Oklahoma Federations is now in the history books.  The two states sent their best-of-the-best to compete to each state to qualify a boater and co-angler to advance to the 2021 TBF National World Championship.  The NSF rules allows the top co-angler to move to a boater status at National’s if their winning weight totaled more than their leading state boater’s weight.  The tournament was held on Eufaula Lake out of the South Point area in Eufaula, Oklahoma.  The contestants were allowed to fish all waters of the 100,000 acre plus lake.  That gave them over 100 shoreline miles to fish, determining to correct area of the lake to fish was the biggest problem.  From the South Point ramp anglers could go 20 miles in five different directions in their pursuit to find the most productive fishing area.  The bonus for this weekend was the light winds, an unusual happening in Oklahoma.  The pairings were provided by the staff at TBF headquarters in Ponca City, Oklahoma, all the anglers had to do was catch fish, and they did.

The first day of the tournament greeted the anglers with the threat of rain but much cooler temperatures.  Of the boaters, Blake Wilson, Arkansas, took the lead as he weighed in the largest stringer for the day with a five fish limit tipping the scales at 15.84#.  Blake’s stringer included the boater’s big bass of the day.  Kevin Brown, Arkansas, took second with a limit weighing 13.90# that included a 3.99# big bass.  Third, fourth and fifth separated three Arkansas anglers by only 0.21# with Mike Webster taking the third slot with a 12.33# limit while Tanner Jones garnered fourth added a by a 4.25 pounder to bring his weight to 12.20#.  Sam Huston took fifth with 12.12# stringer that included a 4.01#.  Josh Ray, Arkansas, took over sixth place with the largest of the 11# bags.  Josh ha a total of 11.74#.  Four Oklahoma anglers took seventh thru tenth with only 0.58# separating seventh to tenth.  Stewart Ryan led the Oklahoma boaters with 11.15# for seventh while Brandon Beck took eighth with 11.09# nosing our Jody Linder by only 0.01# while Jody’s total was 11.08#.  Jonathan Dotson led the co-anglers on day one with a limit of bass weighing 12.50#.  Jonathan’s limit included a 4.14# big bass.  Julie Downs, Oklahoma, took second with a limit tipping the scales at 12.16#.  Her big bass hid the scales at 3.77#.  Third place went to Daniel Anthamatten with a total of 12.09#. Daniel’s limit included a 5.09# big bass, the biggest on day one.  Fourth place went to Steve Carlon, Oklahoma, who had a total of 11.99# that included a 3.50 pounder.  Stan Harris, Arkansas, took fifth place with a total of 10.97# followed at sixth by Wayne Osborn stringer weighing 10.41#.  Kenyon Johnson, Arkansas, was ninth with a limit weighing 9.24#.  Rounding out the top ten for the co-anglers was Mark Strickland, Oklahoma, with 8.53#.

The second day started with fairly clear skies but became overcast during most of the day.  Kevin Brown moved up from his first day second place finish to take the second day with the biggest stringer of the tournament that totaled 18.33#.  Kevin’s catch included a 4.86# lunker.  Wyatt Ryan, Oklahoma, made one of the biggest jumps with a 16.23# stringer to take second improving from his nineteenth on day one.  Larry Gragg, Arkansas, also made a big jump with a 14.58# stringer that included a 4.34# lunker.  Larry was third moving from 21st on day one.  First round leader Blake Wilson dropped to fourth with a stringer weighing 14.28# that included a 4.42 pounder.  The biggest improvement was by Jeff Creecy, Arkansas, who moved up from 36th on day to garner fifth with 14.18# anchored by the big bass of the day weighing 5.20#.  Ricky York, Arkansas, improved his 29th day one finish to take sixth with 13.71# that was anchored by a 3.99# largemouth.  Seventh went to Brandon Beck to move up one place from day one with a 13.04# stringer that included a 3.68 pounder.  Marc Downs, Oklahoma, jumped up to the top ten with a limit weighing 12.96# from his seventeenth finish on day one.  Marc had a 4.10# bass to anchor his limit and give him eighth for the day.  Ninth was taken by Chris Tarron, Oklahoma, jumping from a 35th placing on day one.  Chris’ weight was 12.48#.  The tenth place slot went to Larry Carter, Arkansas, that brought 12.14# of fish to the scales.  The co-angler list was much like the boaters on day two, only two anglers from the top ten on day one repeated to break into it for day two.  The biggest move was Matt Tucker, Arkansas, took first place on day two with a limit weighing 14.34# after finishing 32th on day one.  Second place was garnered by Alex Saiz, Oklahoma, with a limit weighing 12.35# with a 4.42# anchor.  Third place was taken by first day leader Jonathan Dotson who registered an 11.70# limit.  Fourth went to the only angler that had the same placement each day.  Steve Carlon mirrored day one with an 11.19# to get fourth.  Shawn Lewis, Arkansas, moved up 10 places to fifth with a 10.77# limit.  Sixth place was tapped by Kyle Warden, Oklahoma, with a 10.74# stringer that was mostly consisting of a 4.23# lunker after his 25th place finish on day one.  Issac Lair, Oklahoma, took seventh place with 9.66# nosing out Gary Milam, Arkansas by only 0.05#. Gary was eight with a total weigh of 9.61#.  Allen Musser, Oklahoma, captured ninth place with a 9.41# stringer while John Duvall, Arkansas, rounded out tenth with a 9.32# weight.

The National Semi-Finals returns 100% of their entry fees back to the participates.  The weekend event pays 75% for both the boaters and non-boaters with 10% expenses to cover tournament expenses and 15% to the TBF Nationals.  The boaters Champion was Kevin Brown who had a total weight of 32.23# and received $2270 for the title and then added an additional $500 as the top Ranger Cup angler to bring his total winnings for the weekend to $2770.

The top boater and co-angler have earned the right to the 2021 TBF National Championship.

The Arkansas qualifiers will be Kevin Brown as the boater and Jonathan Dotson as the co-angler. 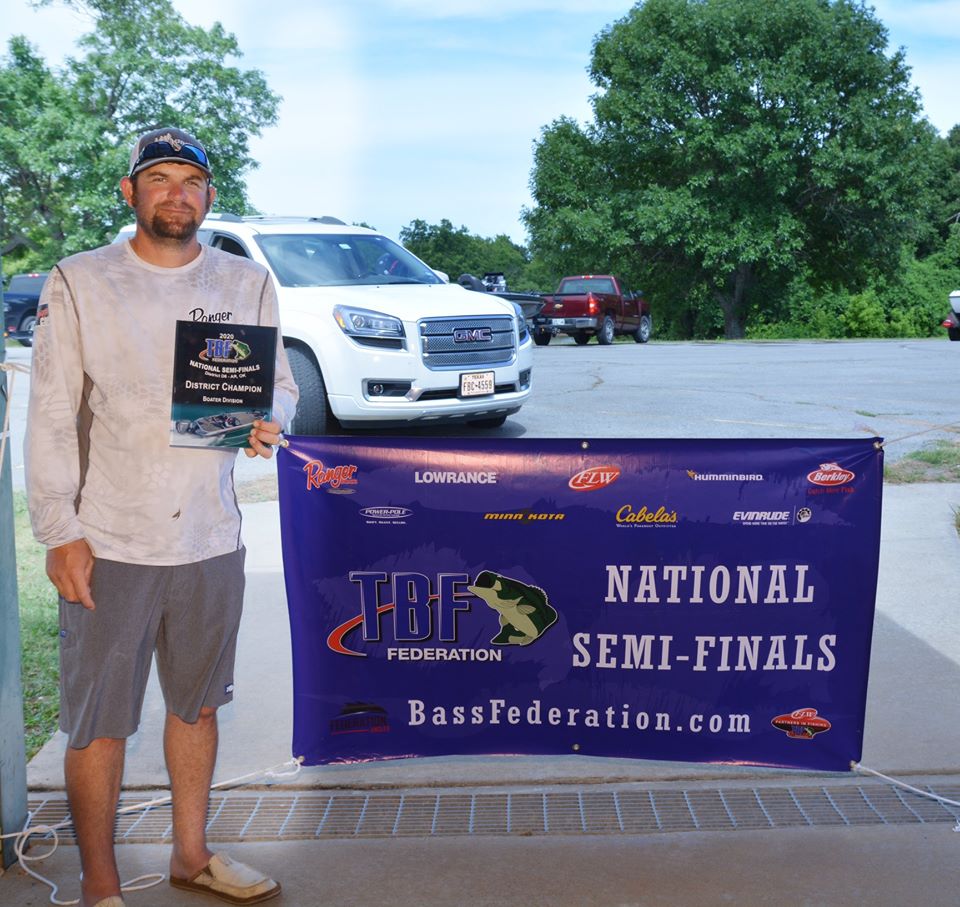 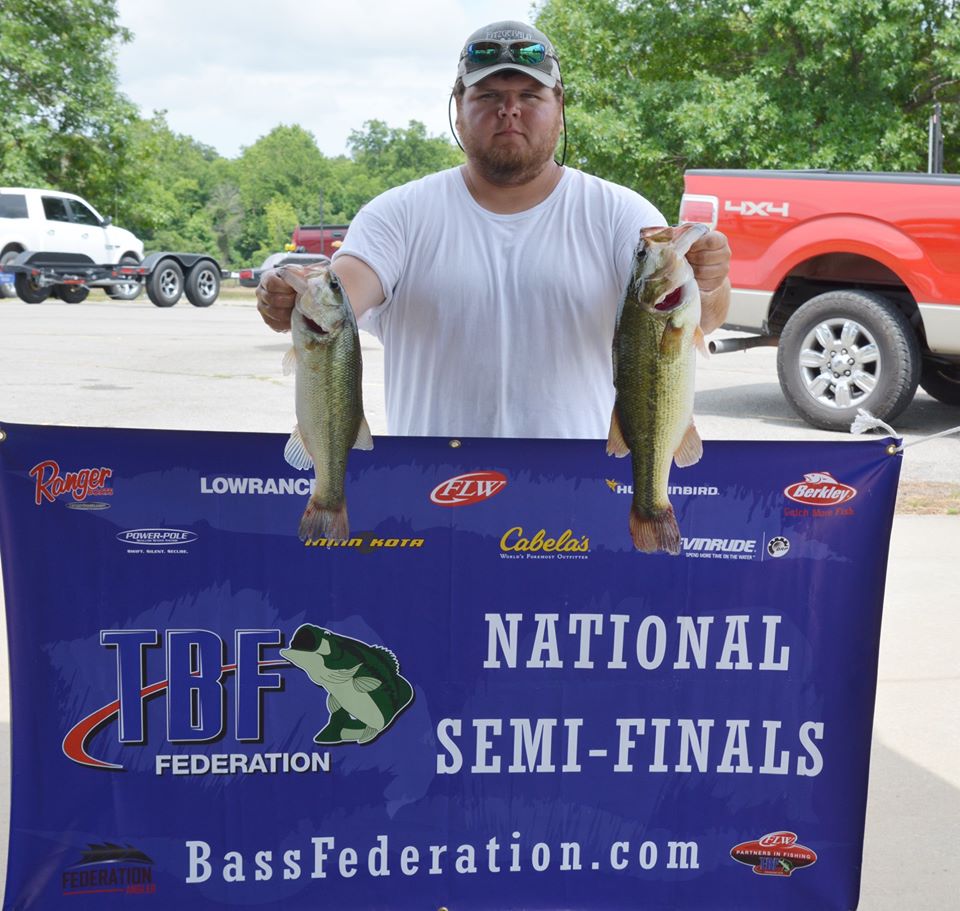 Oklahoma will be sending Wyatt Ryan as the boater and Steve Carlon as the co-angler. 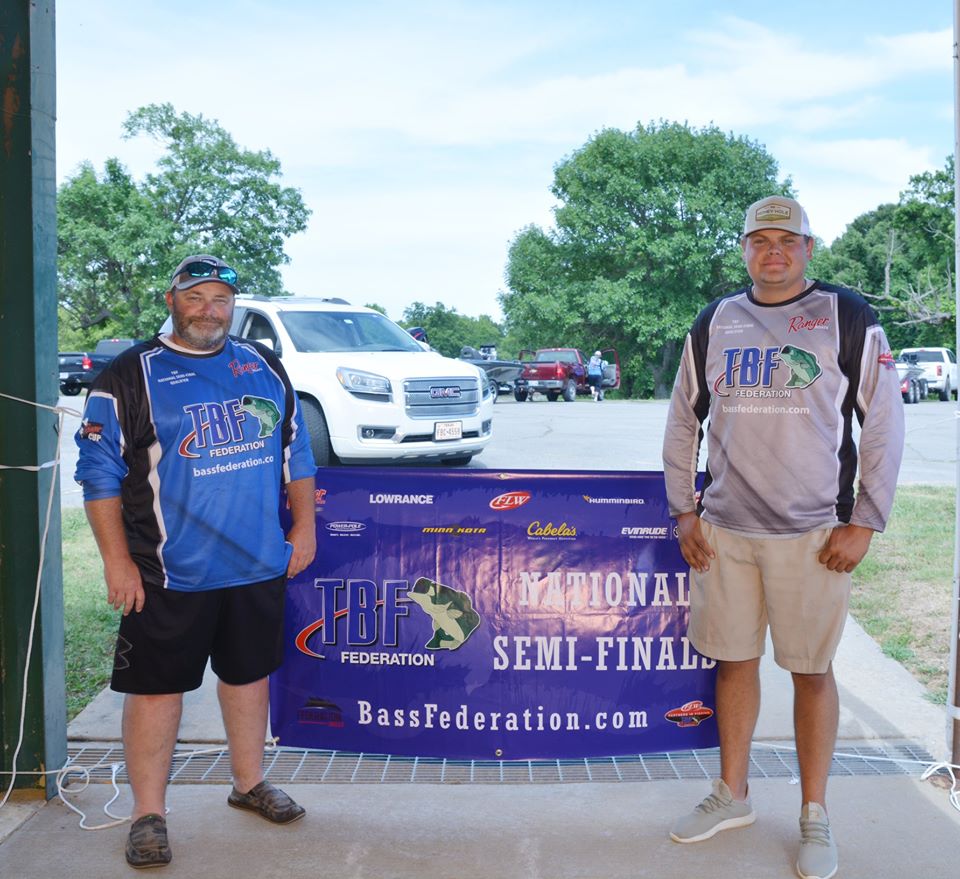 The date and site of the 2021 championship event will be determined and announced from the National TBF office.