A strong field of 25 boaters and co-anglers converged on Truman Lake September 19th for the start of the 2-day TBF National Semi-Final.  The first cold front of the Fall brought fantastic weather to the Ozarks but also challenged the anglers with the first wave of the fall transition. Truman Lake has had a great rebound over the last couple years with lots of 14-18 inch fish and top tournament bags in the high teens to over twenty pounds.  Highs for each day of practice were in the low 80’s with morning lows around 60 degrees.  Winds were variable but coming from the North-Northeast, putting some fish in a funk. Summer water temps in the high 80’s also began to cool down with temps in the mid 70’s by tournament time.

Due to an abnormally dry August, the lake level was low (about 2 feet below normal pool) for the event but water quality was good with about 2 feet of visibility on the main lake.   One of the advantages of Truman Lake is the amount of water available to the anglers but the spring pandemic caused the rescheduling of several tournaments, creating pressure on the fish prior to and during the event.  To avoid this pressure some boaters made practice runs of 25-30 miles up the Pomme or Osage arms to explore dirtier water in search of bigger fish.  Lots of smaller 2-3 pound fish were caught but consistent 5 fish limits were difficult to find.  Two distinct patterns were emerged during practice, shallow fish on trees on the main lake and secondary points and suspended fish in deep main lake trees.  Fish were transitioning back out to the main lake following shad which puzzled many anglers and was an unusual pattern for Truman.

The tournament started with Saturday’s low in the upper 50’s and 8-10 mph winds from the NNE.  A hazy sunrise caused by the fires on the west coast delayed take-off slightly but by 6:50 all the boaters were on their way to their first spot.  Day 1 boater results showed Robert Hime of Missouri in first place with 5 fish for 14.53 pounds followed by Don Heiser at 13.35 and Jeremy Montgomery of Kansas with 12.79.  Attesting to the tough, changing conditions only 7 limits were weighed but Robert Hime was able to land a 5.38 pound kicker to take home the big bass pot for the boaters.  The co-angler side was led by Greg Lampton with 9.11 pounds, Devin Pino at 9.04 and Jeff Trip with 7.42.  Devin also landed the big bass on the co-angler side on Saturday on a plum worm. 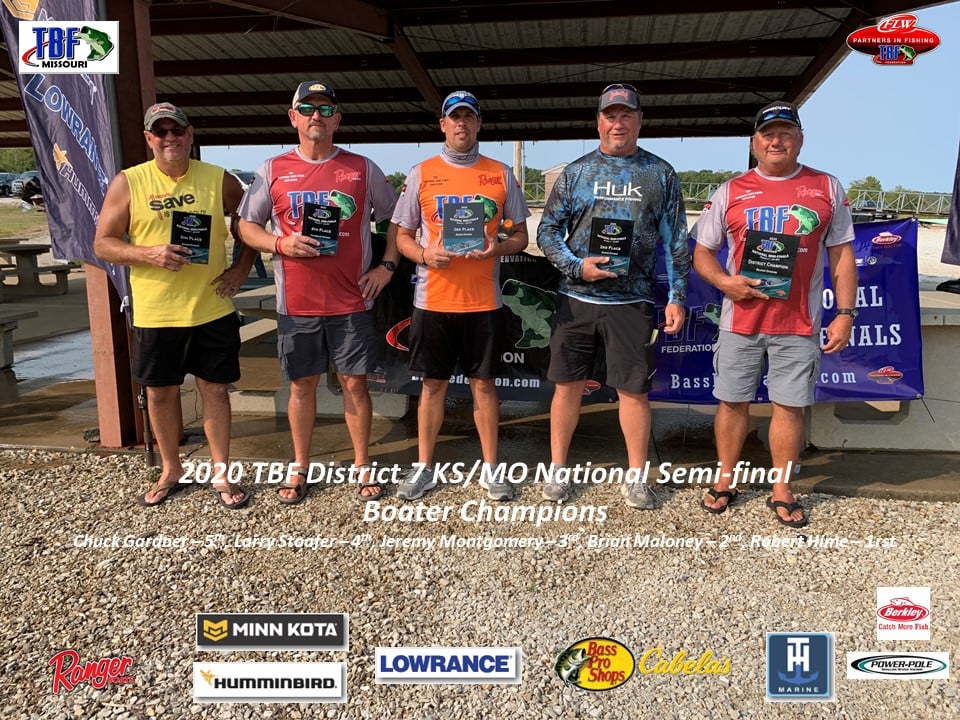 The second day dawned with a slight change in wind direction coming from the east and moving to the SE later in the day.  Robert Hime cemented his win by following up his first day sack with another nice bag of 13.33 ending the two days with a total of 27.86.  He was able to stay close to take off area and get an hour and half of topwater fishing in with buzzbaits. After the topwater flurry died he would make a 25 to 30 mile run up the Osage arm, working his way back down flipping trees and throwing spinnerbaits on windblown points. The winning baits were a ½ ounce homemade compact black and silver buzzbait along with ½ ounce white and silver spinnerbaits Robert also makes himself.  As the first place angler from the Missouri TBF, the win gives Robert the chance to move on to the 2021 TBF National Championship next spring and shot at the Living the Dream Package! 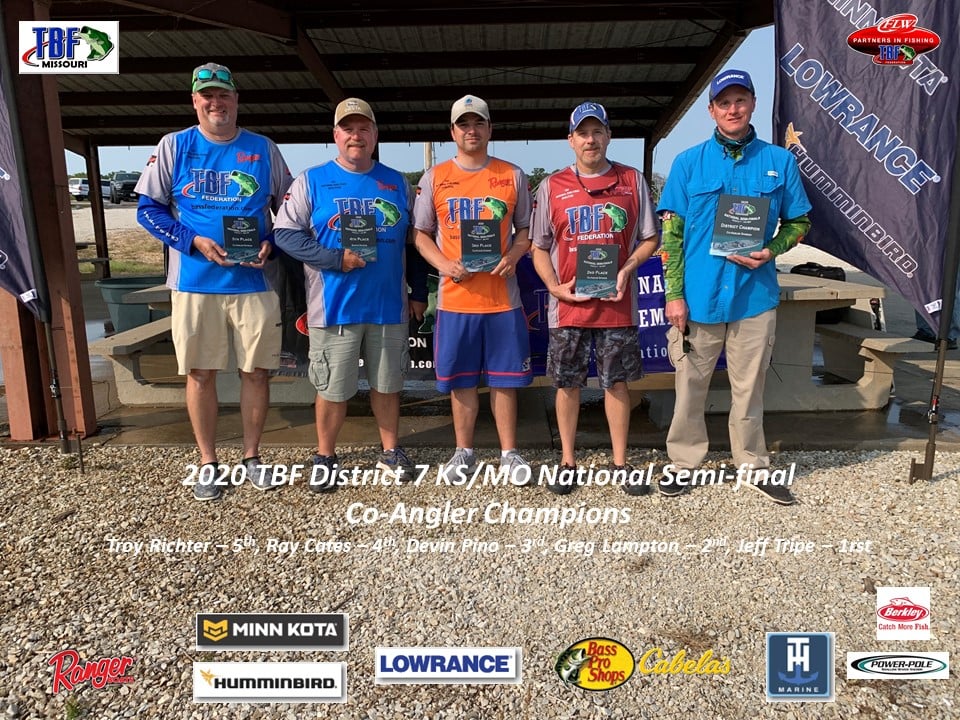 Finishing in second on the boater side was past BFL All-American Champion Brian Maloney with a total of 25.56 pounds. Like many anglers Brian began the day fishing shallow with topwater baits and soft plastics.  Later in the day he would try to upgrade his bag by flipping deep trees in 18-24′ using a dark colored 10 inch worm. Finishing 3rd overall and first on the Kansas side was Jeremy Montgomery with 24.4 pounds of Truman Lake bass.  Jeremy started day one up the Pomme and Osage arms flipping cedar trees on main lake points with a plum worm.  His fish were suspended in trees in 10-20 feet of water.  In the afternoon he moved to the Tebo and finished his limit and upgraded his sack twice. Day 2 started slow, with no keepers in the boat at 11:30 but undeterred he moved to the Grand and Tebo and caught 5 keepers quickly to cement his placement.  As the top Kansas boater, he will join Robert Hime at the TBF National Championship and try to bring a championship back to District 7. 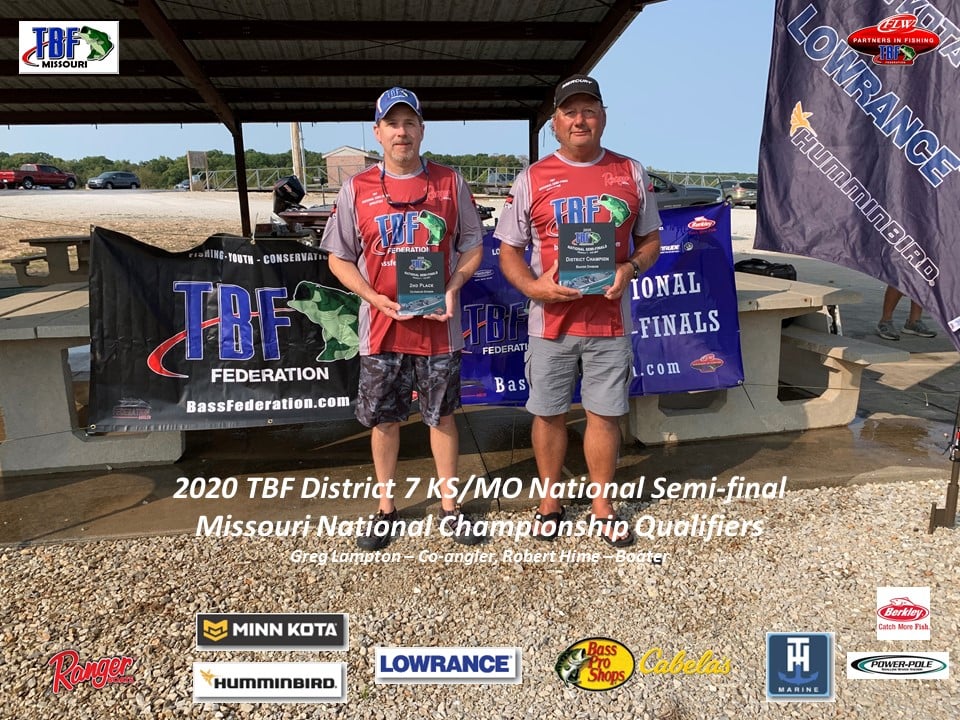 Rounding out the top anglers on the boater side in 4th place was Larry Stoafer (23.15 pounds) and in 5th place was Charles Gardner (18.44 pounds).  Larry focused his early day on the shallow main lake flats up the Osage arm casting a KVD 1.5 square bill on standing timber and stumps.  As the day wore on, he transitioned to flipping plastics (green pumpkin brush hog) but stayed shallow, finding fish in 2-3 feet of water.  Charles also focused on shallow fish but used a moving bait (bladed jig) on a main lake flat on Saturday and staying put on the same area on day two but transitioning to a flipping bait to secure his spot in the top 5. 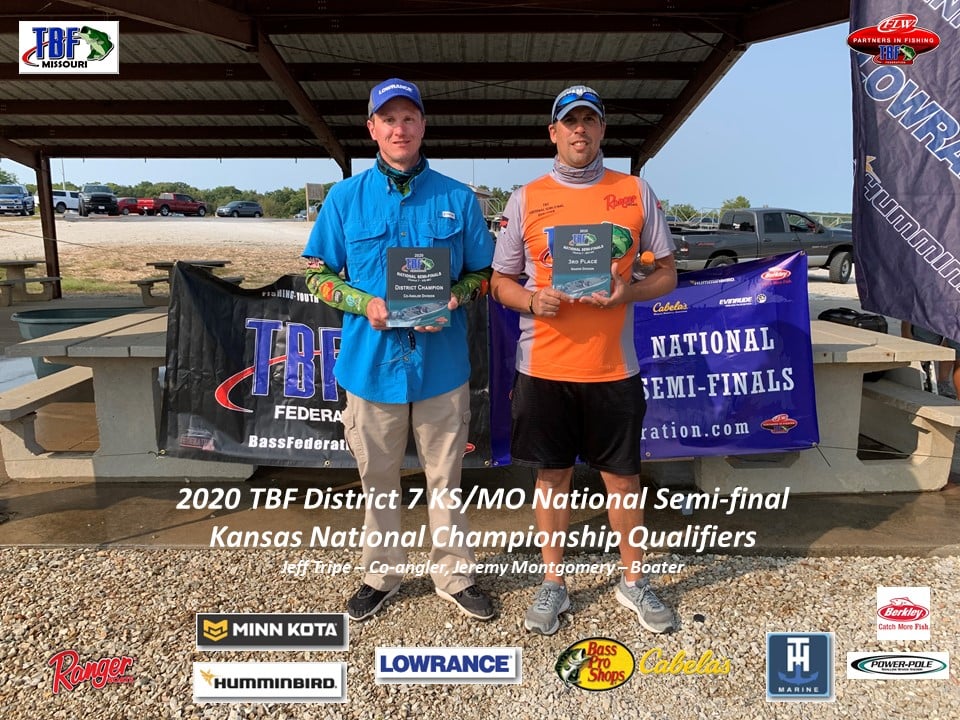 Fishing from the back of the boat is always a challenge and the “random draw” format of this event presents each angler with the challenge of adapting each day to a wide range of boater strategies. The top co-angler for the event was Kansan Jeff Tripe with a final bag of 12.5 pounds.  Finishing second, and first out of Missouri was Greg Lampton with 12.11 pounds. Each of these anglers had to adjust to the locations selected by their boaters and used a variety of moving baits (spinnerbaits and topwater) along with soft plastics to catch fish behind some of the Midwest’s finest boaters.  As a result of their efforts they have both won the opportunity to move on as co-anglers to the 2021 TBF National Championship!  Finishing 3rd was day one leader Devin Pino with 10.92 pounds followed by Ray Cates with 8.93 and Troy Richter with 8.62 pounds. 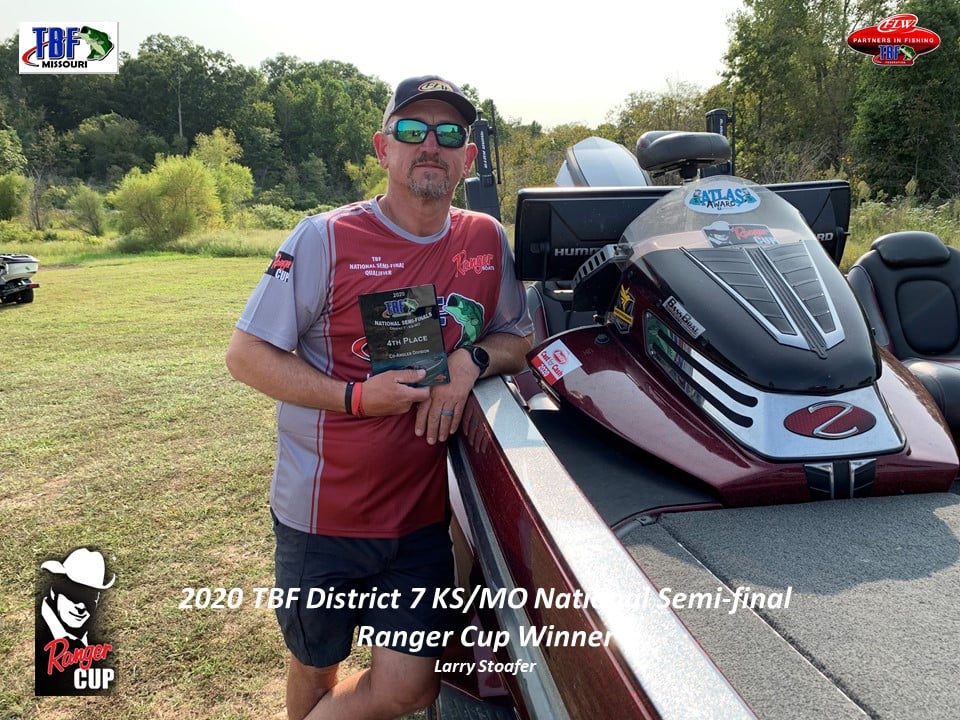 The Missouri TBF would like to thank all the participants for their cooperation and support at this event.  While the weather was great, the lingering COVID pandemic required changes in our tournament procedures that resulted in some delays.  Your patience was greatly appreciated.  We have also received lots of initial feedback from our new members complimenting their boater/co-angler on their attitude and fellowship in the boat.  Some of these participants are new to the TBF and this experience at this event goes a long way to helping both the Missouri and Kansas TBF continue to grow.