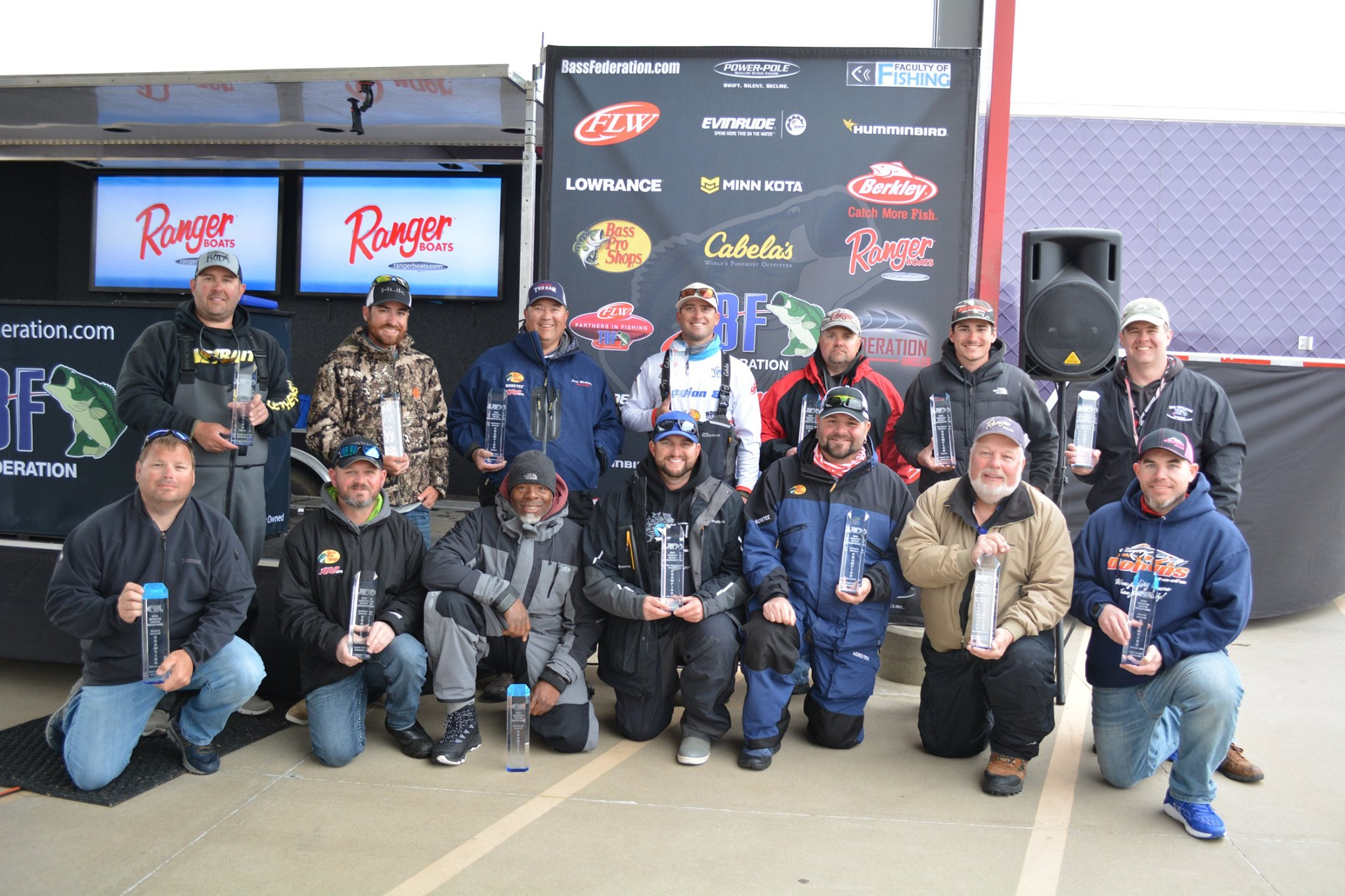 After a tough first day on Grand Lake O’ the Cherokees 108 TBF champion anglers launched from Grove, Okla., today to switch the tides.  Weather conditions were less than favorable for the average lake-goer with temperatures in the low 50’s, plenty of cloud cover and Oklahoma’s resilient winds.   But, for TBF’s elite the fishing conditions proved favorable.  Some anglers still struggled to catch them but those that did brought in heavier weights and solid bags of bass.

Freeman is fishing for the Kentucky Bass Federation representing the Southern Division.  He started fishing the federation when he was 11 years old in the junior division.  Now, one day of fishing separates him from the $125,000 prize package including $20,000 cash, a 2020 fully-rigged Ranger Z520L with Evinrude 250 G2 outboard, power poles, Lowrance Electronics and Minn Kota Trolling Motor, his first BFL All-American a stipend of $5000 worth of paid entry fees into his circuit of chose and countless other “Living YOUR Dream” opportunities.

“That’s what TBF is all about, for a weekend angler this a dream” Freeman continued.  “It’s been a surreal experience and now going into the last day with a 7lb lead – when things are suppose to roll your way, they really roll your way.”

Freeman was just two ounces shy of the overall lead yesterday with his 14 pound 14 ounce bag.  He’s reportedly finding his fish fast in spots that just keep on giving.

It’s just 5 bass.  Anything over that is overthinking. Their opportunistic feeding fish and I have to make my opportunities count because there’s just five bass between me and $125,000 prize package.”

Derick Pendleton, was the day one leader on the co-angler side and had the overall big bag of 20 pounds 5 ounces.  Pendleton solidified his lead today with two fish weighing 4 pounds 2 ounces making his tournament total 24 pounds 7 ounces.

“Nerves got me a bit today and the weather wasn’t what I expected,” Pendleton said.  “It was a little colder out there and we never got to see any sun.”

Less than a pound separates Pendleton from Samuel Jenkins from Louisiana who’s holding down second overall with 23 pounds 12 ounces.

“I knew I was going to need more fish today to give me a comfortable lead.  But, I’ve got a game plan if the weather is more like today.  From the way it fished Thursday coming into today I’d like it to do what it did Thursday.  Either way, I’m just going to adapt to my boater who is definitely on fish and do whatever I can to make it happen.”

The top boaters and co-anglers from each division were crowned Division Champions today and were awarded “Living YOUR Dream” prize packages and slots in the 2020 BFL All-American.